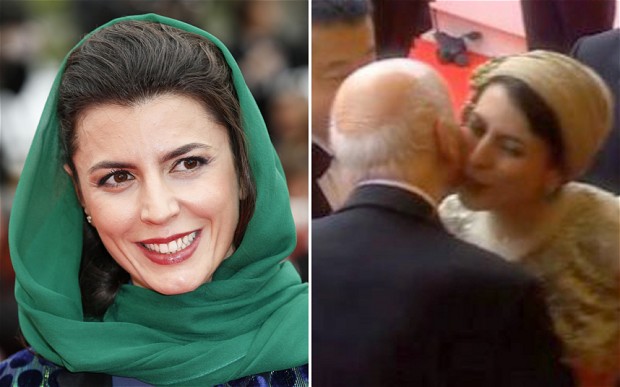 Iranian court is asked to order the public flogging of award-winning actress Leila Hatami for greeting Cannes festival president with a kiss
Share:

A red carpet peck on the cheek by Leila Hatami, the Iranian actress at the Cannes Film Festival has been reported to the country’s courts by activists who are seeking a public flogging as punishment for violating Islamic laws.

Hizbullah Students, a group of university students with links to Iran’s Revolutionary Guard yesterday filed a complaint with Iran’s judiciary for the prosecution of the film star who starred in the Oscar-winning, A Separation.

Miss Hatami was condemned by Islamic Republic officials for kissing Gilles Jacob, the President of Cannes Festival, while attending the event as a member of the jury.

Mr Jacob tried to play down the incident, describing it as “a usual custom in the West” after it was condemned as an insult to Iranian womanhood.

“I kissed Mrs Hatami on the cheek,” Mr Jacob said. “At that moment, for me she represented all Iranian cinema, then she became herself again.

According to the Guards-run Tasnim news website, the Hizbullah Students organisation called for Hatami to be flogged for “kissing a strange man”. The maximum sentence the offence can incur is 50 lashes.

Iran’s Islamic rules stipulate that a man and a woman who are unrelated cannot embrace in public. Moreover a woman should not have her hair on display. The actress had a scarf around her neck but had not covered the crown of her head.

“We, the undersigned, who are a group of student Muslim brothers and sisters, ask the cultural and media branch of the judiciary to prosecute Leyla Hatami for her sinful act of kissing a strange man in public, which according to article 638 of Islamic Criminal Justice carries a prison sentence,” the petition read.

“Furthermore, the action of this film star has hurt the religious sentiments of the proud and martyrs breeding nation of Iran and as such we also demand the punishment of flogging for her as stipulated in the law.”

Mr Jacob has insisted there are no grounds for such a backlash.

“This controversy based on a normal Western custom is baseless,” he said.

Iranian conservative media have claimed the greeting “was an affront to the chastity of women in Iran”.

“Iranian woman is the symbol of chastity and innocence,” he said.

While she is visiting the south of France for the annual Cannes festival in southern France, the actress lives in Iran.