Rai tells France 24: “I am the Patriarch and make my own decisions” 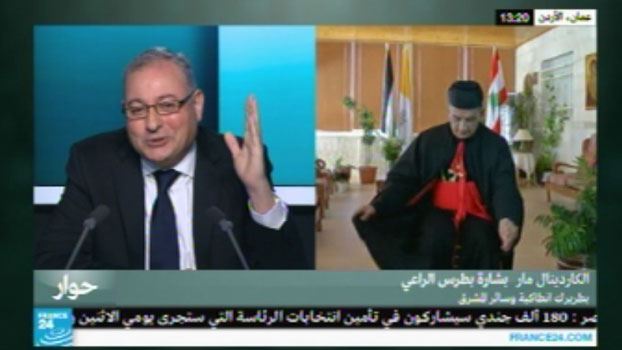 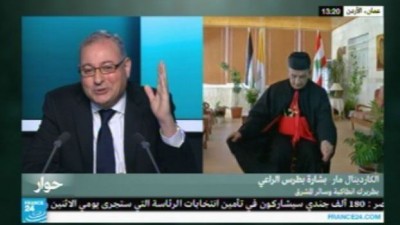 Maronite Patriarch Beshara Boutros al-Rai unplugged his microphone during a live interview with France 24 on Friday during which the reporter was questioning his judgment over the decision to go to Jerusalem .

“Look” he told the reporter several times ,” today I am the Patriarch and I make my own decisions but it seems you still don’t want to understand “.

After he abruptly ended his interview and unplugged his microphone, he was heard saying:

I didn’t come here today to be indicted ” Rai who was interviewed in Amman, Jordan said.

The reporter pointed out that some have described the visit as “a scandal” and “a suicidal step,” and he also pointed out that Rai will be the first patriarch to visit the Holy Land since the creation of the state of Israel and that his predecessor Patriarch Sfeir never went there.

“I will not meet any political or civil personalities,” he told the reporter

“ I am the Patriarch today , I know my duty as a Lebanese citizen… I have received the approval of president Michel Suleiman and PM Tammam Salaam before I embarked on this trip ..I am a law abiding Lebanese citizen,unlike some others I respect the Lebanese sovereignty , but it seems you do not want to understand,” Rai added before leaving the studio.

When Pope Francis arrives in Jerusalem on Sunday for a three-day visit to the Holy Land, Patriarch Rai will be welcoming him as at the head of the Maronite church for the region

Patriarch Rai is making the trip to Jerusalem despite sharp criticism from the iranian backed Hezbollah militant group.

Ibrahim Amin al-Sayed, head of Hezbollah’s political council, said last week that the trip carried “risks and drawbacks . . . in terms of repercussions at the level of Lebanon and of the Israeli entity.”

Lebanon and Israel do not allow their citizens to visit each other’s countries; under Lebanese law citizens who do go can be charged with treason.

Explaining his visit, the Maronite patriarch said that because the leader of the Roman Catholic communion was going to the Holy Land and Jerusalem – a diocese of the Maronite church – “it’s normal that the patriarch should welcome him”.

However, in a concession to the delicacy surrounding the visit, Patriarch Rai will not meet any Israeli officials, be it military or civilian.
Cardinal Rai will also not be part of the Pope’s official delegation, but will arrive with him in the Palestinian city of Bethlehem from Amman for mass on Sunday.

He will be one of several eastern Catholic patriarchs accompanying the Pope on some or all stations of his visit, including the head of the Greek, Chaldean, Syrian, Coptic, and Armenian rites. In Jerusalem the Pope will meet Bartholomew, Patriarch of Constantinople, at the church of the Holy Sepulchre, the centrepiece of a visit meant to showcase reconciliation between the Catholic and Orthodox Christian communions.

Pope Francis will also on Monday visit the Yad Vashem Holocaust remembrance centre and lay a wreath at the tomb of Theodor Herzl, the founder of Zionism – a move that Palestinian activists have criticised as a “whitewash” of the occupation. Cardinal Rai will not join him there.

Israel has about 10,000 Maronite Christians, about three-quarters of whom lived there before the founding of the Jewish state. Members of the community are delighted about the cardinal’s visit.

“Our Muslim brothers can go from Israel to Mecca to make the hajj – more than 10,000 go there every year – but we Maronites cannot go to Lebanon,” says Sobhy Makhoul, chancellor of the Maronite patriarchate in Jerusalem, who is coordinating the church leader’s visit to Israel. “If we can’t go there, he can come to us.”

After the Pope’s return to Rome on Monday, Patriarch Rai will visit Maronite communities in Galilee and other Israeli cities.