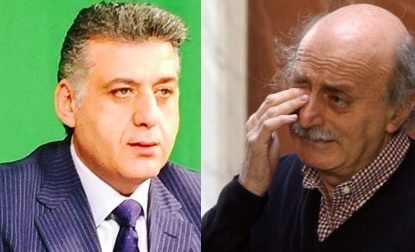 Progressive Socialist Party leader MP Walid Jumblatt denied accusations of the Syrian regime of undermining respect for the Syrian state and derided the attempt of the Syrian court to summon him.

I will file it with the rest of the summons I have received , Jumblatt said in ridiculing the Syrian court’s recent summon, adding “I will distribute them to my friends for free”.

His comments come after a Syrian Criminal Court in Latakia issued judicial notices through its embassy in Beirut against Jumblatt and March 14 journalist Fares Khashan, accusing them of undermining the respect of the state.

LBCI TV reported the Syrian embassy handed the notices to the Lebanese Foreign Ministry, which in turn forwarded them to the ministry of Justice.

Justice minister Asharaf Rifi confirmed to LBCI that he revealed on Thursday the judicial notices and is currently studying them.

Rifi was quoted by LBCI as sayinG: ” We were surprised by these notices, especially that the Syrian regime’s amnesty ruling of 2013 included these accusations.”

The interesting part is that the lawsuit goes back to 2006, when Syria’s military court issued arrest warrants against Jumblatt and several March 14 figures accusing them of “defaming” Syria.

Jumblatt at the time was a key member of the ant-Syrian March 14 alliance and an outspoken critic of Hezbollah and the Syrian regime but he has since visited Syria few times, met the Syrian president, changed his stance several times and is now a centrist.

Jumblatt stressed that the he has always called for a political solution to the crisis.

“I wish to point out that I have never once planned to undermine the standing of the Syrian state, which must be protected from collapse and its unity preserved,” Jumblatt said in a statement Friday.

“That is why I called for application of the Geneva convention and implementation of a political solution to protect what remains of Syria . The Syrian regime went too far in killing tens of thousands of its own people and displacing millions inside and outside Syria and arbitrarily arresting hundreds of thousands whose fate is still unknown,” he stated.

Jumblatt added:
“Until this very moment we still call for a political solution to protect the state’s infrastructure and prevent Syria from division. This can only be achieved through a transitional stage for Syria’s sake and after pursuing the murderers, terrorists and killers, releasing of thousands of detainees and determining the fate of those whose fate remains unknown .”

Jumblatt went on to ridicule the Syrian regime for issuing the charges from the northern city of Latakia rather than from the capital and derided Syria’s ongoing attempt to stage presidential elections.

“It would have been more fitting if the summons had been issued in Damascus rather than Latakia, in keeping with the nature and grave importance of the charges”. He said

Latakia is the capital of the Alawite stronghold . Several reported indicated that Assad may move the capital to Latakia to be amongst his Alawite people, a sect which is closely linked to the Shiite sect.

Notices to be returned

Rifi said in remarks published on Friday that he was “likely” to return the legal notices sent Jumblatt and Paris-based journalist Fares Khashan.

Rifi told Al-Mustaqbal newspaper that the summons were marred with substantial flaws.

“In form, the Syrian court must address a Lebanese court as per the agreements signed between the two countries, instead of sending the summons to the Justice Ministry through the Foreign Ministry,” Rifi said.

“The second flaw is substantive and is related to the amnesty issued in Syria in 2013, which is supposed to annul such summons and accusations,” he added.

Rifi also said he wondered what the purposes were behind sending these summons “at this specific timing.”