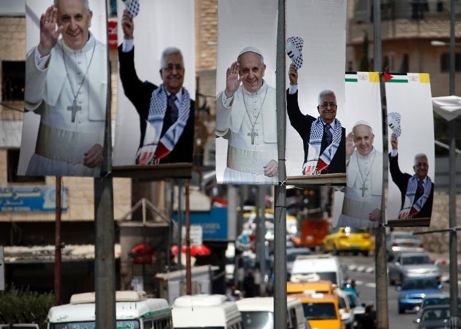 Banners bearing portraits of Pope Francis and Palestinian Authority president Mahmud Abbas are displayed on the main street of the West Bank Town of Bethlehem, on May 20, 2014 (AFP Photo/Thomas Coex)
Share:

Pope Francis will be treading on sensitive ground on a trip to the Middle East this week that is intended to promote inter-faith dialogue but has already sparked protests from ultra-orthodox Jews and radical Islamists.

The Argentine pontiff will be accompanied part of the way by two old friends from Buenos Aires — Rabbi Abraham Skorka and Islamic studies professor Omar Abboud — in a conciliatory gesture that hopes to stave off criticism.

But a spate of Israeli hate crimes against local Muslims and Christians is souring relations ahead of the pope’s three-day visit to Israel, Jordan and the Palestinian Territories starting on Saturday.

The Shiite group Hezbollah is also angry about a visit to Israel — a first — by Lebanese Maronite Patriarch Beshara Rai to meet the pontiff.

John Allen, a Vatican expert at the Boston Globe, said the visit would be “a religious and political high-wire act” but noted Francis was well placed for inter-faith outreach.

“Francis may carry less baggage than any pope who has ever visited the Holy Land,” Allen said.

“As a non-European, Francis isn’t associated by most Jews with anti-Semitism and the Holocaust, while most Muslims don’t tie him to the Crusades or the ‘clash of civilisations’,” he said.

Francis’s ties to the Jewish and Muslim communities when he was archbishop of Buenos Aires showed a focus on constructive ways of working together to help the needy, rather than addressing the burdens of the past.

He has also proved adept at steering clear of the most controversial issues like the Catholic Church’s sainthood cause for pope Pius XII, who has been accused of failing to speak out against the extermination of Jews by Nazi Germany.

In contrast, his predecessor Benedict XVI had defended Pius XII and caused uproar when he reinstated an archaic prayer for the conversion of Jews.

Benedict also quoted a mediaeval description of Islam as “evil” in a speech that was misinterpreted but still led to a breakdown in ties with Sunni Muslims.

When he was elected by fellow cardinals last year, Jorge Bergoglio chose to be named after St Francis of Assisi, an Italian saint who is particularly respected in the Muslim world for his role as a peacemaker during the Crusades.

Just days after his election, the new pontiff told a group of foreign ambassadors: “It is important to intensify dialogue among the various religions and I am thinking particularly of dialogue with Islam.”

French cardinal Jean-Louis Tauran, who leads the Vatican’s Council for Inter-Religious Dialogue, said Francis has emphasised a “dialogue of friendship” with other religions.

But it would be hard for Francis to avoid delicate topics altogether on a trip to the Middle East.
There will be a close watch on how he refers to Jewish settlements, Palestinian refugees, the West Bank security barrier and the Palestinian Territories themselves — which the Vatican in 2012 recognised as an independent state.

Israel and the Vatican are also still at odds over management of key holy sites in Jerusalem after more than 20 years of negotiations — an issue that has led to protests by ultra-orthodox Jews in the run-up to the visit.

The trip begins in Jordan where Francis will meet Syrian refugees — a chance to speak out against the conflict there as well as the forced emigration of Christians from the Middle East.

On Sunday, Francis is scheduled to fly to Bethlehem and will meet with children from a Palestinian refugee camp, as well as with Palestinian president Mahmud Abbas.

He will then travel on to Jerusalem for a joint prayer with representatives of other Christian denominations — an event billed by the Vatican as a highpoint of the visit.

On Monday, the pope will visit several sites in Jerusalem and celebrate mass in the Cenacle, the place where Christians believe Jesus held the last supper.