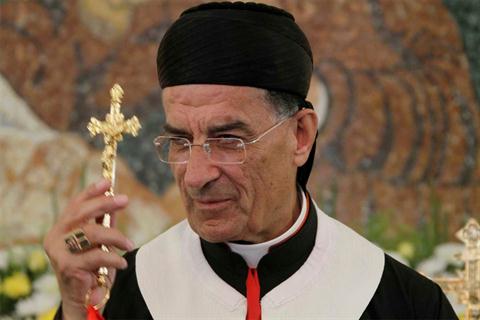 Kuwaiti newspaper “al Kuwaitiyeh’ quoted Palestinian sources inside the Green Line as saying that a “senior Hezbollah official has called and urged the leaders of the ” 1948 Arabs ” to convince the leaders of the Christians in Israel to issue a statement appealing to the Maronite Patriarch Bechara Boutros Rai to refrain from visiting the holy land .

The sources pointed out that the senior Hezbollah official called the israeli phone numbers of leaders of the ” 1948 Arabs ” , including the head of the ” Abanaa al Balad -sons of the country ,” Raja Aghbarieh , and urged them to pressure the of church leaders to issue a statement to appeal to Rai to refrain from visiting the holy land because it ” it could be interpreted as normalization with Israel and recognition of the Jewish state . ”

The sources pointed out that the response to Hezbollah’s request was negative , as the church leaders welcomed Rai’s visit and considered it a religious pastoral visit . They also blasted Hezbollah interference in the internal affairs of the Christian community.

This development comes after a Hezbollah delegation visited the Patriarch Bechara at his residence in Bkirki on Friday but failed to dissuade him from traveling to Jerusalem.

Rai, whose church is the largest Christian denomination in Lebanon, said on May 3 he would travel to the Holy Land to welcome the Roman Catholic pontiff during his May 24-26 visit.

Rai who became a cardinal in 2012 is set to be the first patriarch to do so since the 1967 occupation of Jerusalem by Israel, which is technically still at war with Lebanon.

Rai’s predecessor, Cardinal Nasrallah Boutros Sfeir, accompanied Pope John Paul II to Jordan in 2000 but declined to visit Israel. The issue didn’t arise during the 1964 meeting of Pope Paul VI and Ecumenical Patriarch Athanagoras because East Jerusalem was then under Jordanian control.

Lebanese citizens are banned from entering Israel, but Maronite clergy may to travel to the Holy Land to minister to the estimated 10,000 faithful there. Rai who insists that the trip has no political significance will travel on a Vatican diplomatic passport.

What is significant here according to analysts is that FPM leader Michel Aoun who is reportedly extremely close to the patriarch never raised his voice in defense of this visit which is extremely important for the Christian Maronite community in the entire Middle East .

Aoun is closely allied with the Iranian-backed Hezbollah Shiite militant group and the Syrian regime .