Geagea meets Hariri in Paris, Jumblatt heads there too 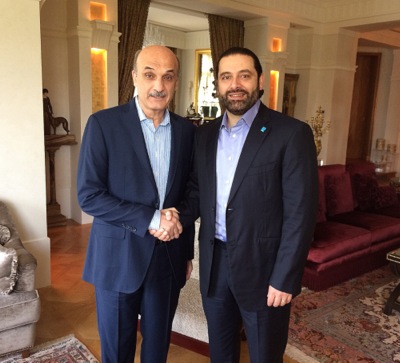 “The meeting dealt with the general situations in the country, especially the pressing issue of the presidential election,” a statement issued by Hariri’s office said.

“The viewpoints were identical regarding the need to hold the presidential vote within the constitutional deadline, to reject vacuum and to make all possible and needed efforts and contacts to prevent it,” the statement added.

The two leaders also stressed the need that “all MPs take part in electoral sessions.”

Meanwhile, LBCI television said the meeting became tense “when Geagea proposed holding the election with a one-half plus one quorum, the thing that was rejected by Hariri.”

“They agreed to hold another meeting,” LBCI added. 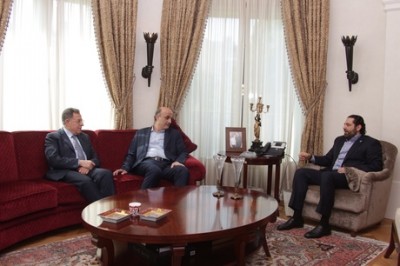 It said political talks will continue in Paris “beyond the May 22 electoral session, although Hariri will travel tomorrow to Riyadh to take part in a dinner banquet in honor of (Prime Minister Tammam) Salam.”

On Saturday, An Nahar newspaper said 2 other presidential candidates, who were not named, had also visited France prior to Geagea.

Geagea embarked on an Arab and European tour on Friday that will reportedly include Saudi Arabia.

According to Voice of Lebanon radio (93.3), Jumblatt is expected to meet with Saudi Foreign Minister Prince Saud al-Faisal in the French capital.

A fifth round of polls is scheduled to be held next Thursday, two days before the expiry of President Michel Suleiman’s tenure, amid fears that the continued deadlock will plunge the country into a state of total political vacuum.

The Parliament so far has failed to elect a new president over differences between the March 8 and 14 alliances. Most of the Hezbollah led-March 8 MPs have boycotted four rounds of elections . Hezbollah has rejected the candidacy of Geagea, whose nomination was officially endorsed by the March 14 alliance.