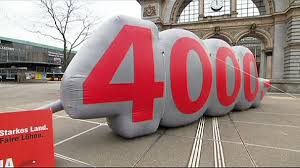 Swiss voters rejected the world’s highest national minimum wage, striking down a proposal for an hourly minimum of 22 francs ($25) by an overwhelming margin.

The measure, which called for a full-time worker to be paid at least 4,000 francs a month, was opposed by 76.3 percent of voters, Swiss national broadcaster SRF reported, citing final results. Polls, including one by gfs.bern, forecast that outcome.

“In German-speaking Switzerland, especially in the countryside, there’s a strong view that the state shouldn’t get involved too much,” said Laurent Bernhard, a researcher at the Institute of Political Science at the University of Bern. In these regions “campaigns opposing state meddling generally find favor” among voters, he said.

The hourly minimum, proposed by trade unions, would have been the world’s highest when adjusted for purchasing power parity, according to 2012 data from the Organization for Economic Cooperation and Development. While nine out of ten Swiss full-time workers earn more than that already, trade unions argued the pay of those least-well off needed to reflect the country’s high cost of living. By contrast, companies and the government opposed the measure, saying it would hurt the economy by increasing joblessness and pushing wages up across the board.

Traditionally, wages in Switzerland have been negotiated by collective bargaining, with agreements covering pay, vacation days, and even retirement age. The median wage in the Swiss private sector was 6,118 francs last year. A gas station shop worker in Lucerne is paid 3,570 francs a month, while a 62-year-old music teacher in the city of Winterthur gets a monthly salary of 9,758 francs and six weeks of vacation, according to a 2014 study published by the Canton of Zurich Labor Ministry.

“I’m of the view that it is not up to the state to dictate what we should pay,” said Eveline Neeracher, president of the associationGastroBern. All employees at her restaurant Weissenbuehl in the Swiss capital receive more than the proposed minimum, she told SRF today.

Many small-and-medium sized businesses, which generate two-thirds of employment, couldn’t afford to pay employees more, the government said. Switzerland’s jobless rate as measured by the International Labor Organization was 4.1 percent late last year, compared with 11.8 percent in the euro area.

“Of course we’re disappointed,” said Giorgio Tuti, president of the union of transport workers SEV. Some “330,000 people earn a wage from which they can’t live. The problem remains,” he said.

“The higher personnel costs would get passed on to consumers in the form of higher prices,” Boris Zuercher, head of the Employment Directorate at the State Secretariat for Economic Affairs, said in an interview in March. “That means we wouldn’t be better off at all, because wages will rise but purchasing power won’t.”

At Bobst Group SA (BOBNN), which makes printing presses and machines for cardboard boxes, no employee working 40 hours a week makes less than 4,000 francs a month, Chief Executive Officer Jean-Pascal Bobst told L’Agefi in an interview last week. With a minimum wage, Bobst would “no longer be able to guarantee” development of its activities in Switzerland, he said.

Today’s vote against a minimum wage breaks with a series of plebiscites — including ones on excessive executive compensation and immigration — that companies say make Switzerland a less desirable place to do business.

Swiss voters have also frequently supported free enterprise: In 2001 they backed a constitutional limit on federal government debt, while in 2012 they voted down a proposal for six weeks of paid vacation.

“Generally in Switzerland, people don’t like the state to regulate too much,” said Andreas Ladner, professor of public administration at the University of Lausanne.