Hezbollah: The new president should be a supporter of the resistance 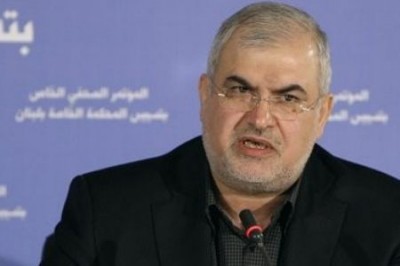 A Hezbollah official reiterated on Sunday  that  the next president should be a supporter of the resistance and accused the March 14 coalition of counting on the presidential bid to change “Lebanon’s position.”

“The election was obstructed because some parties insist on nominating a candidate who wants a civil war  between the Lebanese and wants to undermine the resistance’s accomplishments,” the National News Agency quoted  Hezbollah MP Mohammad Raad  as saying in a possible reference to Lebanese Forces leader Samir Geagea who secured 48 votes in the first parliamentary session  set for electing  president to replace Michel Suleiman

“This candidate will not make it to the president’s seat, no matter what powers are backing him.” Raad said .

“Only someone keen on the resistance … can become president,” said  Raad, who heads the Iranian-backed Hezbollah’s parliamentary  bloc.

“We want a president who adheres to the formula that achieved victory for our people, and who does not give up on it ” , he said

Another Hezbollah official ,  deputy head of Hezbollah’s politburo Sheikh Nabil Qawouq said  on Sunday that the March 14 coalition was trying to use the presidential elections to weaken the party and move the country away from its support for the resistance.

“If the March 14 coalition is counting on the presidential election to change the position and reality in Lebanon, they are miscalculating,” he said.

“We want the presidential election to strengthen the national constants in Lebanon … but the other team is waiting for the opportunity to change Lebanon’s position by targeting the resistance.”

Al-Akhbar newspaper quoted a Hezbollah official as saying in remarks published on May 9  that Change and Reform bloc leader MP Michel Aoun is Hezbollah’s sole candidate for the presidential elections.

“The prominent officials in Hezbollah have told all their visitors, from all political parties, that the party’s command refuses to discuss any candidate for presidency other than Aoun,” the source told the daily which is closely linked to the Iranian-backed Hezbollah militant group.

“Hezbollah’s current slogan is: either Aoun [for president] or no one,” the source added.

Aoun has reportedly been March 8th undeclared candidate , but according to observers he is far from ever being considered a consensus candidate.

March 14 leaders have been urging the Hezbollah-led March 8 coalition to name its candidate for the presidential election, and to provide the required quorum for the parliament sessions set to elect a president to  replace Suleiman whose term ends on May 25.

Yesterday Suleiman called for Hezbollah to withdraw its forces from the civil war in neighboring Syria.

“From this place of return, I appeal for a return to Lebanon and a withdrawal from neighboring arenas to prevent future repercussions on Lebanon’s unity, social fabric and choices,”Suleiman said in a public appeal to Hezbollah near the end of his term.

According to Ali Hussein , a Lebanese  observer  “Hezbollah has long ceased to be a resistance Movement and is busy implementing  Iran’s agenda in the region”.