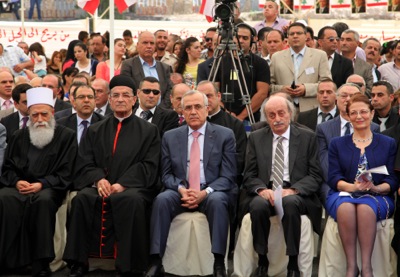 The Shouf region of Mount Lebanon was the focal point in Lebanon this Saturday and luckily for a good purpose. The region was celebrating the Christian-Druze reconciliation in the village of Brih ( near the Mountain resorts of Barouk and Ain Zhalta).

The reconciliation meeting is between the Christians, who were displaced during the 1975-1990 Civil War, and the Druze residents of the area.

Suleiman said during his speech: “Brih was the scene of wars that were greater than them.”

Today’s celebration demonstrates the importance of the unified state and army, he added. 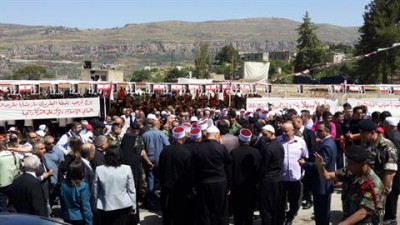 “A state, whose army alone controls arms in Lebanon, is capable of defending the nation,” stressed Suleiman in a possible snub to Hezbollah which insists that that resistance should be part of the defense strategy.

This state alone will be able to lure back the displaced to their homeland, said the president.

“I renew my commitment to the Baabda Declaration that will steer Lebanon clear of regional disputes and help alleviate its tragedies,” he noted.

“I call on all involved to withdraw from regional battlefields and adopt the agreements of the national dialogue,” he demanded, while stressing the need to place Lebanese interests above others. Another possible reference to Hezbollah which based on orders from Iran has ignored the Baabda declaration and sided with the Syrian regime in the civil war which resulted in the killing of over 150,000 and the displacing over 10 million Syrians.

He also highlighted the importance of Christians in the region, congratulating Brih on achieving reconciliation.

For his part, Jumblatt said: “Today’s celebration will put an end to the divisions of the past and restore ties between the two sides.”

Addressing Suleiman, he remarked: “You have boldly guided Lebanon through various challenges in order to prevent the country from falling into chaos and vacuum.”

He hailed the president for the adoption of the Baabda Declaration, lamenting however the failure in its complete implementation because of the regional crises.

Commenting on his centrist role in Lebanese politics, Jumblatt said: “This position helped assert the authority of the state.”

Turning to Patriarch Rai, Jumblatt said that his presence in Brih complements the reconciliation sponsored in Mount Lebanon by his predecessor Patriarch Nasrallah Butros Sfeir in 2001.

“Your presence asserts the role of Christians in the region given the challenges it is passing through,” he added.

Addresing the residents of Brih, Jumblatt stated: “Today marks the beginning of the march towards reconciliation, coexistence, and harmony and the commitment towards the country.”

For his part, Rai praised Suleiman for sponsoring the reconciliation seven days before the end of his term in office, as well as the efforts exerted by Jumblatt and Minister of Displaced Alice Chabtini in achieving it.

“We hope that today will mark a new page in the history of Brih,” Rai added, while stressing the need to create job opportunities in the village.

“We call on all Lebanese to overcome their divisions,” he demanded, while urging parliament to elect a president before Suleiman’s term ends on May 25.

“We are in need of a president who would be capable of achieving reconciliation throughout Lebanon by defeating the war of petty interests, which is more dangerous than armed war,” he noted.

“We need a president who can continue along the path of reconciliation and dialogue,” Rai declared.

The ceremony also witnessed the laying of the foundation-stone for two churches in the village.

“We open our hearts to all Christians returning to the village,” 36-year-old Maher Ali a Druze resident of the town of Brih was quoted as saying in welcoming the Christians back to their hometown

PSP media officer Rami Rayyes told An Nahar daily Saturday that the celebration is continuation of the “historic reconciliation that took place in al-Mokhtara under Sfeir in 2001.”

The celebration is part of efforts to eliminate the scars of the 1975-90 Civil War, he added.

Also on Saturday, Jumblatt hosted a lunch in Suleiman’s honor at the Mukhtara palace , ahead of which the president lauded the PSP chief for his support throughout his six years in the presidency and during his years as commander of the army.

“Cooperation with Jumblatt will continue because he will not allow the violation of national principles,” said Suleiman.

More pictures of the event