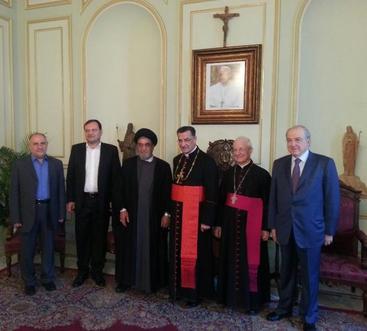 A Hezbollah delegation visited Maronite Patriarch Bechara Boutros al-Rai at his residence in Bkirki on Friday to dissuade him from traveling to Jerusalem and to press the importance of electing a Lebanese president who represents all the Lebanese, according to local reports .

He explained that Rai stressed that he will visit Jerusalem for “religious purposes.”

“Al-Rahi’s visit would have negative repercussions on Lebanon and the region,” Sayyed said in an attempt to dissuade the Patriarch from traveling to Jerusalem

The meeting comes days after Rai announced his intention to visit the Holy Land and in light of fears of vacuum at the helm of the country’s top Christian post after political rivals failed to reach consensus on a candidate.

He added that Hezbollah “wants a president for all the Lebanese.”

“If there is an agreement among the different factions on a candidate, then we would head to parliament to elect a president,” al-Sayyed stressed.

In a related development Al-Akhbar newspaper quoted a Hezbollah official as saying in remarks published on Friday that Change and Reform bloc leader MP Michel Aoun is Hezbollah’s sole candidate for the presidential elections.

“The prominent officials in Hezbollah have told all their visitors, from all political parties, that the party’s command refuses to discuss any candidate for presidency other than Aoun,” the source told the daily which is closely linked to the Iranian-backed Hezbollah militant group.

“Hezbollah’s current slogan is: either Aoun [for president] or no one,” the source added.

Aoun has reportedly been March 8th undeclared candidate , but according to observers he is far from ever being considered a consensus candidate.

March 14 leaders have been urging the Hezbollah-led March 8 coalition to name its candidate for the presidential election, and to provide the required quorum for the parliament sessions set to elect a president to replace Michel Suleiman whose term ends on May 25