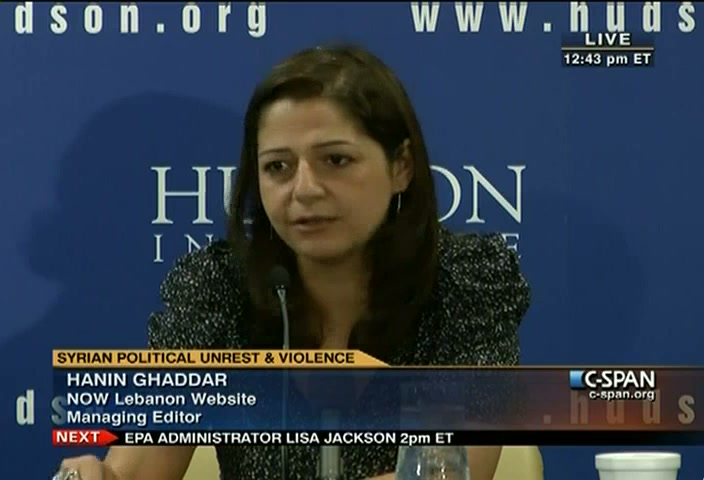 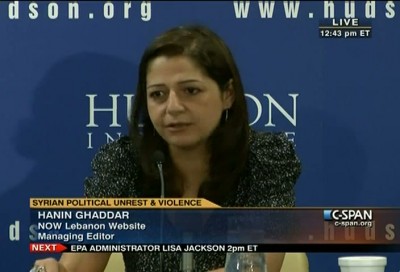 Media Against Violence condemned as “cheap and malicious” the media campaign waged against NOW English Managing Editor Hanin Ghaddar over her participation in a symposium at the Washington Institute for Near East Policy.

“The cheap and malicious campaign waged by the ‘resistance’s’ mouthpieces against our colleague Hanin Ghaddar legitimizes the shedding of her blood by accusing her of participating in a conference in Washington [along with] former Israeli PM Ehud Barak,” the statement issued Wednesday by the NGO read.

The NGO also said that the campaign aimed at distracting from the STL’s trial of Al-Jadeed TV and Al-Akhbar newspaper journalists Karma Khayyat and Ibrahim al-Amin for publishing witness details at the tribunal, which is set up to try the killers of slain former Prime Minister Rafiq Hariri.

“They want to say that the STL is pursuing the ‘resisting’ journalists, while the ‘treasonous’ journalists are being honored [in the US],” the statement read.

The statement also endorsed Ghaddar’s statements at the conference, and accused the journalists behind the campaign of being treasonous themselves.

“Ghaddar was the mouthpiece of every Lebanese who adheres to their sovereignty, independence and free choice, whereas the real traitors are those who are trying to put an end to the STL with iron and fire through their cheap fabrications, and through keeping Lebanon under the yoke of the Iranian guardianship,” the statement added.

A Hezbollah website islamicinvitationturkey.com published an article in which it attacked Hanin for defending the STL and criticizing Hezbollah’s role in Syria’s civil war and in destabilizing the political situation in Lebanon during her appearance at the Washington Institute for Near East Policy and accused her of serving Israel’s interests. But what she said is being said almost daily in the Lebanese media.

Under orders from Iran, tens of thousands of Hezbollah fighters are helping the forces of the Syrian regime of president Bashar al Assad in their fight against the rebels who ae trying to end the 40 year Assad dictatorship.

Also in Lebanon Hezbollah has prevented so far three times in a row the election of a Lebanese president( to replace Michel Suleiman whose term ends on May 25 ) by forcing its allies in the March 8 alliance to boycott the parliament sessions set for electing a new president.

Hezbollah is insisting that any new president must be a friend of the so called “resistance “.

The March 14 Secretariat General also condemned the attack against Ghaddar .

“Ghaddar is being subjected to an irresponsible and unfair campaign,” the statement issued on Wednesday following a meeting read.

The March 14 coalition reiterated its support for the Special Tribunal for Lebanon (STL) , which is probing the assassination of former Prime Minister Rafiq Hariri.

5 Hezbollah members have been accused of being behind Hariri’s assassination but Hezbollah refused to hand them over to the court . Hezbollah chief Hassan Nasrallah called the accused members “brothers’.

NOW and Ya Libnan