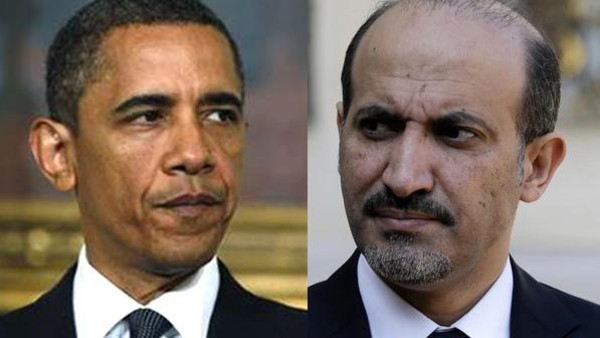 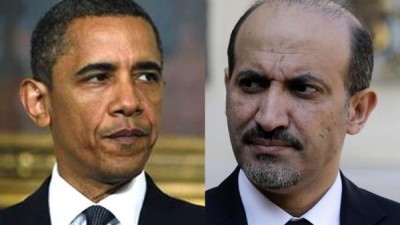 Ahmad al-Jarba, head of the Syrian Opposition Coalition, met with President Obama on Tuesday at the end of a lengthy Washington visit during which opposition leaders said they had laid the groundwork for more substantive U.S. assistance.

The administration continued to resist opposition entreaties to supply surface-to-air missiles for use against the Syrian air force. But, said Jarba adviser Oubai Shahbandar, “we’ve made significant headway and laid the pillars for much more significant discussions.”

In meetings over the past week with top officials at the departments of State, Defense and Treasury, as well as at the White House and Congress, “we made very clear that we are prepared for the long fight,” Shahbandar said.

The coalition’s Washington visit comes at a low point for the Syrian opposition, and for efforts by the United States and its allies to boost the three-year fight to oust President Bashar al-Assad.

France, whose foreign minister, Laurent Fabius, was also visiting Washington on Tuesday, charged that Assad’s forces have deployed “chemical agents” on at least 14 occasions since October, after Assad signed a convention banning their use and agreed to allow the international community to remove and destroy his declared chemical weapons.

The Organization for the Prohibition of Chemical Weapons (OPCW) said two weeks ago that it had removed 92.5 percent of those weapons, primarily nerve agents, which are to be destroyed by the end of June. Syria has said that the remaining 7.5 percent are located in an area outside Damascus where security concerns have prevented access and safe transport.

But Fabius said the Assad “regime is still capable of producing chemical weapons and is determined to use them.” He cited what he called “credible witnesses” saying that chemicals continue to be used, a reference to reports that Syria has used toxic chlorine gas against opposition-held areas.

The administration has declined to confirm or quantify new chemical use by Assad, saying it is waiting for a report by OPCW inspectors.

Syria’s alleged use of chlorine is on the agenda for discussion at a high-level meeting of opposition supporters that Secretary of State John F. Kerry is scheduled to attend in London on Thursday.

Meanwhile, Lakhdar Brahimi, the U.N. and Arab League envoy to Syria, resigned Tuesday after trying for nearly two years to bring the Syrian conflict to a negotiated end.

His resignation was announced by U.N. Secretary General Ban Ki-moon, who said Brahimi had faced “almost impossible odds” in trying to bring Assad’s government to the table. Ban also blamed “the divided world . . . within the United Nations and in the region” for the lack of progress. Russia, Assad’s primary arms supplier and diplomatic backer, has vetoed three U.N. Security Council resolutions designed to bring pressure on the Syrian government.

Brahimi spoke before delivering his final briefing to the council in a closed-door session.

With Ban at his side, he said the occasion was “not very pleasant for me. It’s very sad that I leave this position and leave Syria behind in such a bad state.

“I’m sure that the crisis will end,” Brahimi said. “The question is, how many more dead? How much more destruction is there going to be before Syria becomes again the Syria we have known?”

An estimated 150,000 Syrians have been killed since the anti-Assad uprising began in March 2011. According to the United Nations, more than 9 million Syrians have fled their homes, many of them going to refu­gee camps in neighboring countries.

“Brahimi did not fail,” Kerry said at a State Department news conference with his Italian counterpart, Federica Mogherini, also on a Washington visit. “It’s the fault of a party, Assad . . . who absolutely refused to negotiate.”

Kerry also indirectly blamed Russia, which more than a year ago signed on to an agreement to support negotiations with the opposition for a transitional government in Syria. At the time, he indicated, the Russians believed that Assad was losing the war.

But shortly thereafter, he said, Islamist extremist groups began to gain power within the opposition and fighting broke out between them and U.S.-backed moderate forces. At the same time, Iran and Lebanese Hezbollah fighters became actively involved on Assad’s side.

“The dynamic shifted on the ground,” Kerry said.