Coal mine explosion in Turkey kills over 150, hundreds trapped 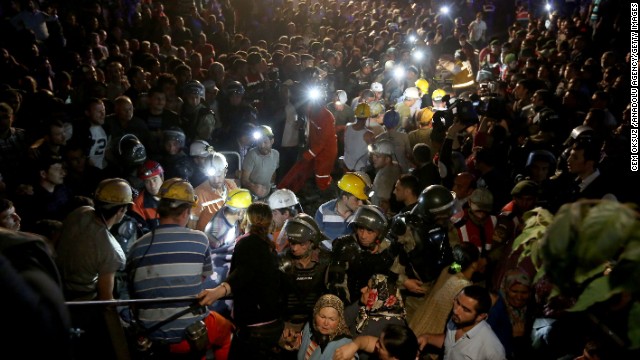 MANISA, TURKEY – MAY 13: Search and rescue operations keep going on in a mine in the western Turkish province of Manisa where a miner has died and more than 200 miners have been trapped inside following a malfunction at an electrical transformer nearby late on May 13, 2014. (Photo by Cem Oksuz /Anadolu Agency/Getty Images)
Share:

An explosion and fire in a coal mine in western Turkey killed at least 151 miners and trapped hundreds more on Tuesday, with the death toll expected to rise in the country’s worst mining accident for more than two decades.

Energy Minister Taner Yildiz said 787 workers had been in the mine in Soma, around 120 km (75 miles) northeast of the Aegean coastal city of Izmir, when the blast occurred.

Carbon monoxide poisoning killed most of those confirmed dead, while another 76 were injured and hospitalized, he told reporters at the scene of the disaster.

Rescue workers pumped oxygen into the mine to keep those trapped by the blaze alive, as thousands of family members and fellow workers, clamoring for information, gathered outside the town’s hospital. A line of police held back the crowd as ambulances arrived.

The explosion, thought to have been caused by an electrical fault, triggered a power outage, making the elevators unusable and leaving hundreds of miners stranded some two kilometers (miles) underground.

It was not immediately clear if the fire had been isolated.

Cengiz Ergun, mayor of Manisa province where Soma is located, cited health officials at the entrance to the mine as saying 157 bodies had been retrieved.

Prime Minister Tayyip Erdogan canceled a day trip to Albania, scheduled for Wednesday, and would instead go to the site of the disaster, sources in his office said.

“Rescue efforts for our brothers in the mine are ongoing … God willing, in the coming hours, I hope to receive uplifting news,” Erdogan said during a speech at a ceremony in the capital Ankara, before the extent of the disaster started becoming clear.

Because the explosion took place during a change in shifts, there was uncertainty about the number of miners inside, but Turkey’s disaster management agency AFAD put the figure at more than 200.

“Fresh air, oxygen is being pumped into the mine. This is the most important thing for our workers down there,” Yildiz said.

“We are facing carbon dioxide and carbon monoxide poisoning … We have to get our friends out of there swiftly.”

But government officials feared the death toll might be on the rise.

“Unfortunately, we could see a grimmer picture. Looks like it will be a very tough night. The death toll may rise but the rescue teams are working hard,” one official said.

Turkey’s worst mining accident was in 1992, when a gas explosion killed 263 workers in the Black Sea province of Zonguldak. The country has a poor health and safety record in mining, particularly coal.

In May 2010, another gas explosion killed 30 miners, again in Zonguldak province.