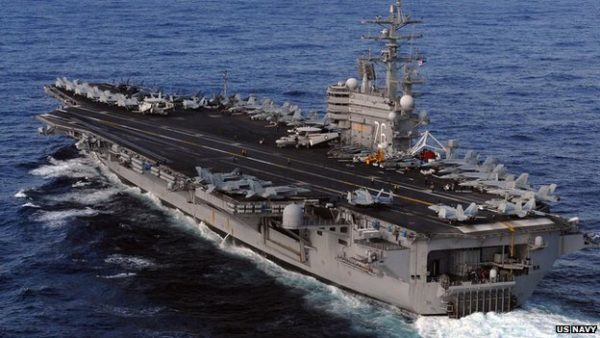 USS Nimitz (CVN-68) is a supercarrier of the United States Navy, and the lead ship of her class. One of the largest warships in the world, she was laid down, launched, and commissioned as CVAN-68, “aircraft carrier, attack, nuclear powered”, but she was later redesignated as CVN-68, “aircraft carrier, multi-mission, nuclear-powered”, on 30 June 1975, as part of a fleet-wide realignment that year.
Share: 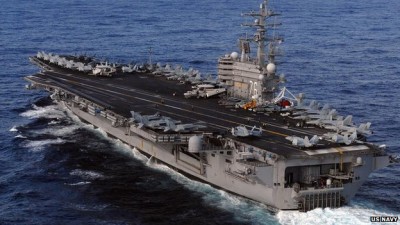 Iran will target U.S. aircraft carriers based in the Persian Gulf if a war were to ever erupt between both countries, an Iranian naval chief warned Tuesday.

“Aircraft carriers are the symbol of America’s military might,” Adm. Ali Fadavi said, according to the Fars news agency. “The carriers are responsible for supplying America’s air power. So, it’s natural that we want to sink the carriers.”

Fadavi is naval chief of Iran’s Revolutionary Guard and made the remarks as Iran completes a large-scale mock-up of a U.S. carrier.

Iran is currently building a replica of the USS Nimitz aircraft carrier, which will be used in future military exercises.

The Revolutionary Guard’s navy has already targeted mock-up U.S. warships, Fadavi said, adding it took only 50 seconds to destroy one of them.

“Whatever Iran hopes to do with the mock-up, it is likely to have zero impact on U.S. Navy operations in the Gulf,” Cmdr. Jason Salata, a spokesman for the U.S. Navy’s 5th Fleet, told the Associated Press.

These moves come as diplomats prepare for a new round of talks over Iran’s nuclear program next week in Vienna.

Negotiators are expected to draft a final nuclear deal this month. They hope to strike a final deal by mid-July, which is when the interim deal reached last November expires.