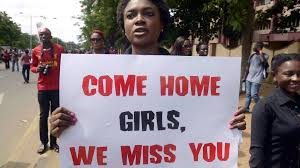 Nigerian President Goodluck Jonathan has agreed to accept the assistance, Carney said. He noted that the U.S. offer does not include military resources.

The leader of Boko Haram claimed responsibility in a video for kidnapping scores of Nigerian schoolgirls and threatened to sell them as slaves.

President Obama and Secretary of State John F. Kerry are meeting Tuesday to talk about the mass kidnapping and how the international community might help deal with the Islamic militants who took responsibility for carrying it out and now threaten to sell the girls into slavery.

More than three weeks after the abductions, outrage is growing in Nigeria over the government’s failure to rescue the girls and curb the terrorist group known as Boko Haram.

On Tuesday, there were reports that gunmen in Nigeria had carried out anorther kidnapping of at least eight girls.

Carney did not openly criticize Nigerian officials for failing to locate and free the victims but did point out that the crisis has gone on for 22 days.

“Time is of the essence,” he said, adding that it was the responsibility of the Nigerian government to free the victims “before they are trafficked or killed.”

“We are absolutely committed to helping Nigeria,” Carney said, “but it is the Nigerian government’s responsibility first and foremost.”

In March, the Pentagon said that Obama was sending additional troops and military aircraft to Uganda as part of an effort to find Joseph Kony, the rebel commander who has terrorized civilians in Central Africa for years.

But Carney said Tuesday that the administration was not currently considering deploying troops or other military resources as part of the Nigerian effort.

Uncertainty persists about the number of students kidnapped on April 14, although police have put the figure at 276. The girls had gathered from neighboring district schools to take exams in Chibok village, in Nigeria’s northeastern Borno state, a Boko Haram stronghold. They were driven off in trucks under cover of darkness.

On Sunday night, gunmen attacked the village of Warabe, also in Borno, and took eight girls, along with food and livestock, news reports said.