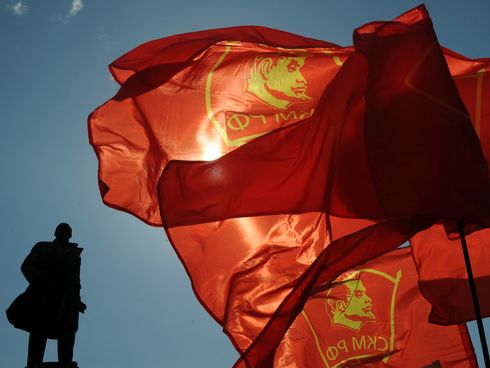 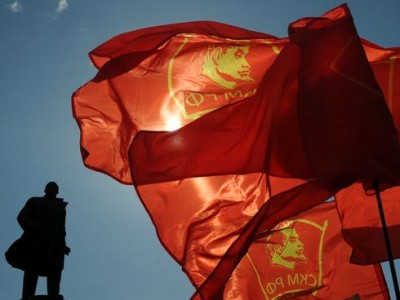 Tens of thousands of Russians marched through Red Square on Thursday as part of May Day celebrations in the first such display of Soviet-era-like ceremony since 1991 – the year the Communist Soviet Union dissolved.

“For the first time, stages will be filled, and five thousand (labor) veterans will stand on the tribunes of Red Square,” Sergei Chernov, chairman of the Moscow Labor Union Federation, was quoted by ITAR-Tass as saying, ahead of the march, which is being seen as part of President Vladimir Putin’s efforts to stoke patriotic feelings following Russia’s annexation of Crimea.

As many as 2 million people were expected to be on hand for the event organized by Russian labor unions, which are mostly loyal to the Kremlin. In the end, about 100,000 people participated in the celebration, some holding signs saying: “Let’s go to Crimea for vacation” and “Putin is right.” Russian flags fluttered through the crowd.

Earlier, he assured that it would not be a return to Soviet times.

“I can say that there won’t be famous statesmen standing on the Mausoleum (like in the Soviet Union),” ITAR-Tass quoted him as saying.

May Day was celebrated with massive rallies on Red Square during the days of the Soviet Union as a commemoration of labor. Red posters glorifying the working man were carried aloft past members of the Soviet Politburo, the unelected leaders of the state, who stood atop the mausoleum housing the body of the Russian revolutionary and the first Soviet leader, Vladimir Lenin.

The Red Army marched past in lockstep, and trucks laden with ICBMs were paraded past the crowds in a show of might to the world.

But after the collapse of communism here 23 years ago the annual parade gave way to less political festivities. The Communist Party and smaller leftist groups still held rallies, but they never regained the stature of the old days.

Many Muscovites customarily use to leave the city ahead of May 1 since it is a holiday. Road blocks and traffic disruptions are common.

More pompous in recent years has been the Victory Day on May 9, commemorating the victory over Nazi Germany in World War II.

This year’s May Day parade comes against a backdrop of patriotism mixed with repression in the wake of Russia’s annexation of Ukraine’s breakaway republic of Crimea last month.

While Moscow’s City Hall authorized several political marches on May 1, including a march by ultra-nationalists, it refused to grant permission to the liberal opposition to Putin to hold a protest rally on May 6, citing preparations for the Victory Day Parade.

Russia’s Kommersant newspaper reported that a Defense Ministry source says Putin may celebrate the day in the Ukraine province of Crimea, which was taken over by the Russian military in what the West calls an illegal invasion.