The United Nations High Commissioner for Refugees (UNHCR) said that Lebanon has become the country with the world’s highest concentration of refugees compared to its total population, according to a report by NOW.

“This month has marked a dangerous turning point, for the number of registered Syrian refugees and those awaiting registration has surpassed a million, making Lebanon the country with the highest per-capita concentration of refugees worldwide,” the UNHCR said in its report, published on Sunday.

Earlier on Sunday, a meeting of senior diplomats and officials from Egypt, Jordan, Iraq, Lebanon, and Turkey was held at northern Jordan’s Zaatari refugee camp.

During the meeting, the United Nations rebuked donors as well as host countries for not doing enough to help millions of Syrian refugees in the region, saying “massive” aid is needed.

Lebanese President Michel Suleiman had warned in March during the Arab Summit in Kuwait that Syrian refugees now constitute 32% percent of Lebanon’s population, and exhorted Arab and international powers to help Lebanon bear the economic and social burden of the growing refugee population. 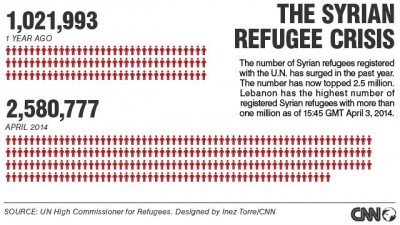