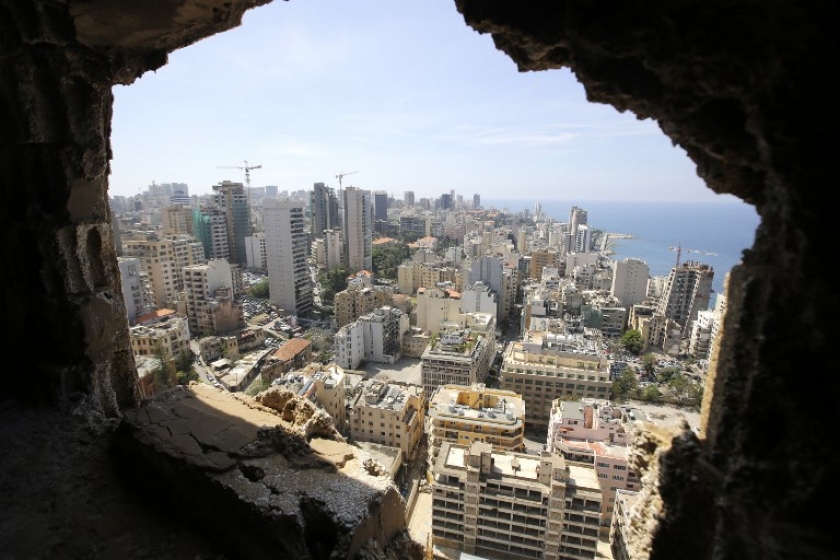 A symbol of Lebanon’s golden age, but also its brutal civil war, the empty shell of the Holiday Inn hotel in Beirut could now take on a new life.

No one yet knows what it will become, but after decades as a chilling reminder of the 1975-1990 conflict, the building is set to be auctioned off in the coming months.

Towering over the Beirut seafront, the Holiday Inn is instantly recognisable because of the bullet and rocket marks still covering its walls, more than two decades after the war that devastated Lebanon.

It survived the so-called Battle of the Hotels, one of the civil war’s earliest and most violent confrontations, pitting Christian militias against Palestinian fighters allied with Lebanese Muslims and leftists.

One of the most iconic images to emerge from the war, taken just as Beirut was being torn apart into east and west, showed a tower of black smoke rising above the building.

The Holiday Inn, which had opened for business a bare two years before the conflict broke out, featured prominently in “Circle of Deceit”, Volker Schloendorff’s vivid 1982 movie about a war correspondent who sets up shop in the hotel while reporting on the raging civil conflict.

It never returned to being a hotel, and has instead loomed silently above a fast-changing city populated by memories of a dark past and dreams of a dazzling future.

“It’s a unique building. It’s sad that 24 years on (from the end of the war), all we see is a carcass,” sighed Roland Abdeni, CEO of real estate company CIL (Compagnie Immobiliere Libanaise), which owns 34 per cent of the building’s shares.

The landmark Phoenicia Hotel just next door has been restored to its onetime glory, but the shareholders of the building housing the defunct Holiday Inn have been locked in a dispute over its future.

While CIL wanted to renovate the building and set up luxury lofts for rent or sale, a Kuwaiti group that owns half the shares has been keen to demolish the site and erect a new tower block like scores of others that have sprung up in post-war Beirut.

A fresh window of opportunity has opened, just as CIL prepares to disband 50 years after its establishment, and now the building is set to be auctioned off.

Though it is devastated, the Holiday Inn has come to form an integral part of Beirut’s modern heritage and uneven landscape.

Army troops and tanks guard the courtyard and entrance, making it impossible to enter without a permit from the military.

The hotel’s once sparkling interior was emptied out by the militiamen who used it as a base.

Its furniture, curtains, doors, woodwork, shutters, dinnerware and lamps were all stolen.

Only the walls remain, as do the inscriptions left behind by Palestinian and Christian militiamen, who occupied the Holiday Inn at different junctures.

In stark contrast with the constant din of central Beirut, silence reigns in the building but for an eerie breeze that whistles through the stairwells.

Onetime visitors to the Holiday Inn remember its luxuriousness and its spectacular cinema.

But former fighters remember the structure as a “tower of death” that acted as a makeshift landmark dividing majority Christian East Beirut from the mainly Muslim West.

“They chased us from one floor to the next, from room to room, from column to column,” said Milad, an ex-fighter from the Phalange, the main Christian party at the time.

“Two comrades and I were the last to leave” before the hotel was taken over by the Palestinians and their allies, he told AFP.

“We waited till dawn, and put on keffiyeh (traditional Palestinian) scarves we took from dead Palestinian fighters,” he said, adding that their disguise allowed them to make a clean escape.

His brother-in-arms, Sassine, remembers how “the hotel’s chairs and tables were transformed into barricades”, and how fires ravaged the woodwork in the rooms.

Palestinian ex-fighter Abu Riad said: “The battle of the hotels was one of the fiercest, and it cost us dozens of killed and injured.”

Years later, it remains unclear what the fate of the site will be, even though the neighbourhood it is located in has come back to life as one of Beirut’s most vibrant and sought-after.

“For historical and aesthetic reasons,” shareholder Abdeni says he does not want to see the building demolished.

If he wins the upcoming auction, Abdeni dreams of refurbishing the building, which even in its current shape is valued at hundreds of millions of dollars.

“There are many people who would love to have a little space in Beirut in such an extraordinary place as this,” he says. — AFP