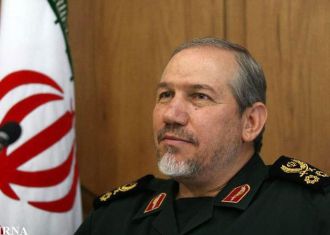 Finally Iran admitted that its investments in the Syrian regime and Hezbollah was to expand its sphere of influence in the entire Middle East .

A senior military advisor to the Supreme Leader has said that Iran’s sphere of influence now covers Iraq and Syria, stretching to the Mediterranean Sea.

Major General Yahya Rahim-Safavi, the former commander of the Islamic Revolution Guards Corps, made the remarks in a ceremony held to mark the anniversary of the launch of the Beit-ol-Moqaddas operation, the Fars news agency reported on Friday.

The Beit-ol-Moqaddas operation was the codename of a military attack in which Iranian forces liberated the port city of Khorramshahr from Iraqi occupation on May 24, 1982.

The West is concerned about the expansion of Iran’s sphere of influence from the Persian Gulf to the Mediterranean Sea, he added.

Elsewhere in his remarks, he accused Israel ,the Western and Arab countries of deployed 40 to 50 thousand terrorists to Syria to destabilize the country. These countries have spent a large amount of money to provoke conflict in Syria, he added.

He went on to say that the strategy adopted by the U.S., Saudi Arabia, Turkey, Qatar, and European countries to topple the government of Bashar al-Assad has failed, which is a strategic victory for Iran.

The three-year Syria conflict, which pits President Assad’s forces against rebels trying to end the Assad and al Bath party dictatorship, has resulted in the killing of more than 150,000 people and forced millions from their homes.