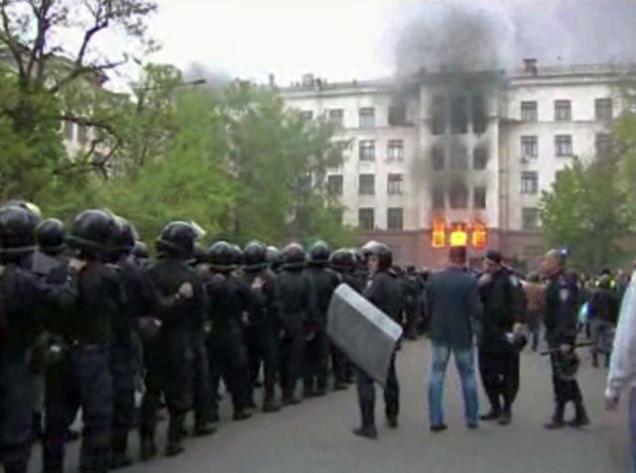 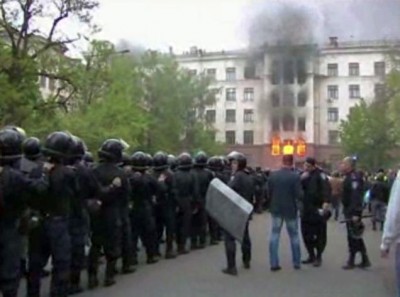 The European Union called on Saturday for an independent investigation into the deaths of at least 42 people in southern Ukraine after a riot ended with dozens of pro-Russian protesters killed in a burning building.

The street battle between supporters and opponents of Russia in the Black Sea port of Odessa that ended in the deadly blaze in a besieged trade union building was by far the worst incident in Ukraine since a February uprising that ended with a pro-Russian president fleeing the country.

EU foreign policy chief Catherine Ashton said the EU was “deeply saddened by the many deaths and injured in yesterday’s events in Odessa”.

“The facts which led to this tragic loss of so many human lives must now be established in an independent investigation and those responsible for these criminal acts brought to justice,” she said in a statement.

The Kremlin, which has massed tens of thousands of soldiers on Ukraine’s eastern border and proclaims the right to invade to protect Russian speakers, has said the government in Kiev and its Western backers were responsible for the deaths.

Kiev said the violence was provoked by foreign demonstrators sent in from Transdniestria, a nearby breakaway pro-Russian region of Moldova where Moscow has a military garrison. It said most of the dead who had been identified so far were from there.

The upheaval in Ukraine broke out after former pro-Russian President Viktor Yanukovich turned his back last year on an agreement on closer trade and political cooperation with the 28-nation EU in favor of a $15 billion bailout from Russia. That sparked street protests that ended with him fleeing Ukraine.

Ashton said the EU urged everyone to exercise restraint and not to exploit events in Odessa “to fuel more hatred, division and senseless violence.”

“All political forces must now assume their responsibility and engage in a peaceful and inclusive dialogue to find a joint way out of the crisis,” she said.

EU leaders added their names to a statement by the Group of Seven industrialized countries last week that accused Moscow of taking “no concrete actions” in support of the Geneva agreement between Ukraine, Russia, the United States and the EU.