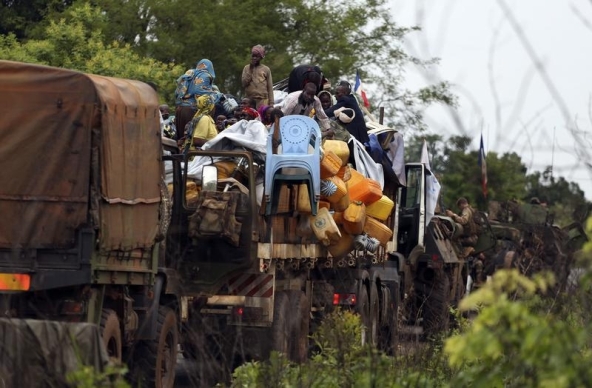 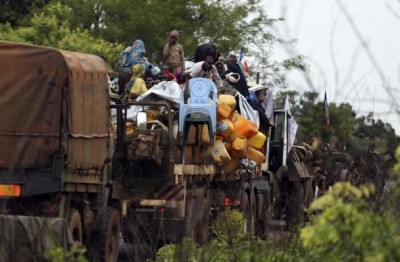 Within minutes of the convoy’s departure, an angry swarm of neighbors descended upon the mosque in a scene of total anarchy. Tools in hand, they swiftly dismantled and stole the loudspeaker once used for the call to prayer and soon stripped the house of worship of even its ceiling fan blades.

One man quickly scrawled “Youth Center” in black marker across the front of the mosque. Others mockingly swept the dirt from the ground in front of the building with brooms and shouted “We have cleaned Central African Republic of the Muslims!”

Armed Congolese peacekeepers stood watch but did not fire into the air or attempt to stop the looting.

Sunday’s exodus of the Muslims from the PK12 neighborhood on the northern side of Bangui further enforces a partitioning of the country that has been under way since January, when a Muslim rebel government gave up power nearly a year after overthrowing the president of a decade.

The United Nations has described the forced displacement of tens of thousands of Muslims as “ethnic cleansing.” The crisis has prompted fears of genocide since it intensified in December when Christian militants stormed the capital. They soon began attacking Muslim civilians accused of having collaborated with the much despised rebel government.

Earlier this year, mob killings and mutilation of bodies took place on a near-daily basis in Bangui. Tens of thousands of Muslims were escorted to safety in neighboring Chad, though earlier convoys were fraught with violence. Militants lined the streets and attacked departing trucks, at one point beating a man to death after he fell from his vehicle.