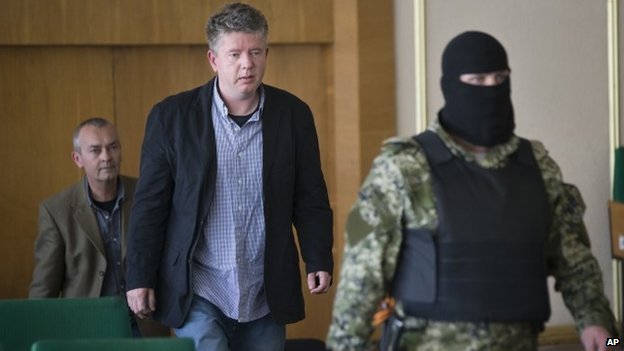 Pro-Russian gunmen in eastern Ukraine have shown seized European military observers to the media, amid attempts to secure their immediate release. 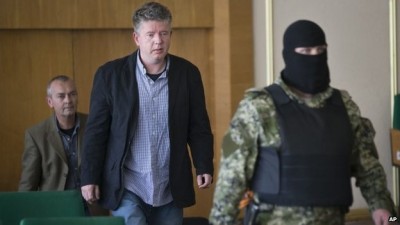 One of the observers presented in the city of Sloviansk said that none of the group had been harmed.

A team from the Organisation for Security and Co-operation in Europe (OSCE) is hoping to begin negotiations.

The gunmen continue to occupy official buildings in a dozen eastern cities, defying the government in Kiev.

In the latest to be reported, separatists in Donetsk seized control of the regional television and radio headquarters, demanding that broadcasts by Russian state channels be switched back on, in place of Ukrainian-language services.

In a separate development on Sunday, pro-Russian gunmen said they had captured three Ukrainian security services members overnight in eastern Ukraine. Kiev later confirmed a number of its officers had been seized.

This comes as the US and EU are preparing new sanctions against Russia, accusing it of destabilising Ukraine.

US President Barack Obama said the Kremlin had “not lifted a finger” to implement last week’s deal in Geneva aimed at easing the crisis.

EU diplomats are expected to meet on Monday to discuss fresh sanctions against Russia.

The Kremlin denies supporting the militia in eastern Ukraine.

‘Treated as mayor’s guests’
The observers from Germany, Denmark, Poland, Sweden and the Czech Republic were presented to reporters in Sloviansk on Sunday.

The monitors – who were captured in the flashpoint town on Friday – were led into the building by masked gunmen.

“All the European officers are in good health and no-one is sick,” said German monitor Col Axel Schneider.

“We are not prisoners of war. We are the guests of (self-declared Sloviansk) Mayor (Vyacheslav) Ponomaryov, and being treated as such.”

However he also said the group had “no indication when we will be sent home to our countries.”

Earlier in the day, an OSCE source told the BBC that a negotiating team had been sent to Sloviansk to try to secure the monitors’ release.

Earlier, Mr Ponomaryov said there was the possibility of exchanging the monitors for militia members held by the Kiev government.

Russia, an OSCE member, earlier pledged that it would “take all possible steps” to secure the release of the observers.

Kiev has accused the militia of using the Europeans as a “human shield”.

The West is accusing Moscow of leading a secessionist revolt in eastern Ukraine after it annexed Crimea last month. Moscow denies the claim.

Russian Foreign Minister Sergei Lavrov said Ukraine must end military operations in the east of the country as part of urgent measures to defuse the crisis.
Ukrainian troops have carried out a number of raids to try to regain control of official buildings.

The crisis began when protesters toppled pro-Russian President Viktor Yanukovych in February and has since plunged East-West relations to their lowest point since the Cold War.

Russia has tens of thousands of troops deployed along its side of the border with Ukraine and has said it will act if its interests are threatened.

On Saturday, the G7 praised Ukraine for acting with restraint in dealing with the “armed bands” that had occupied government buildings.

The G7 said it was committed to intensifying sanctions on Russia, ahead of Ukrainian presidential elections next month.

Photo: The European military observers were led into the building by masked pro Russia gunmen