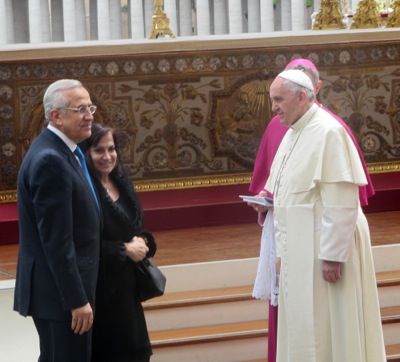 Hundreds of thousands of pilgrims and visitors crammed into St. Peter’s Square and nearby streets for the solemn ceremony, which was followed by a Mass celebrated by Pope Francis.

Adding to the uniqueness of the event was the presence of an ex-pope, Benedict XVI, Francis’ predecessor, who stepped down last year in a rare example of a pope retiring.

Also in attendance, the Vatican said, were some 150 cardinals, 700 bishops, 24 heads of state and 93 official delegations.

Once the ceremony got underway at 10 a.m. local time, Pope Francis was asked three times if John XXIII and John Paul II should be saints — as protocol requires. He responded by reading the Latin canonization text: “We declare and define John XXIII and John Paul II be saints and we enroll them among the saints, decreeing that they are to be venerated as such by the whole Church.”

Relics of the two new saints were then placed in view.

For Saint John Paul II, the relic chosen was a vial of his blood, set in a reliquary, already used at his beatification in 2011. Saint John XXIII’s relic was a small piece of skin taken after his body was exhumed for his 2000 beatification, enclosed under glass at the heart of a silver and gold-plated reliquary.

In his subsequent homily, Pope Francis paid homage to his newly canonized predecessors, stating: “They were priests, bishops and popes of the 20th century. They lived through the tragic events of that century, but they were not overwhelmed by them.”

While John Paul II is by far the more popular and better known of the new saints, Francis indicated he holds John XXIII in high esteem for calling in 1962 for the Second Vatican Council. The so-called Vatican II process modernized the Church and led to numerous reforms, including allowing vernacular languages to replace Latin at Mass and having priests face worshipers during services.

“In convening the Council, John XXIII showed an exquisite openness to the Holy Spirit,” Francis said.

John XXIII, born Angelo Giuseppe Roncalli, served as pontiff less than five years, from 1958 until his death in 1963. He didn’t live to see the achievements of Vatican II.

Referring to John Paul II, Francis added, “In his own service to the People of God, John Paul II was the pope of the family.”

Born Karol Wojtya in Wadowice, Poland, John Paul II would become the first non-Italian pope in more than four centuries when he was elected in 1978. He reigned as pontiff for almost 27 years, visiting more than 100 countries during his tenure as one of the world’s most-traveled leaders. John Paul II is widely regarded as being a major force in the collapse of communism and the fall of the Soviet Union.

As Sunday’s ceremony drew to a close, 700 priests and deacons spread out among the crowd in St. Peter’s Square to give communion.

An estimated 800,000 people descended on Rome for the dual canonizations, a Vatican spokesman said, with 500,000 in and around the Vatican on Sunday and another 300,000 watching the event on giant TV screens set up around Rome.

Some pilgrims camped out around St. Peter’s on Saturday night to grab a spot in the square. Others attended all-night prayer vigils and confession at 11 churches around Rome, where prayers were said in seven languages including Arabic.

With St. Peter’s filled with worshipers, police were turning people away early Sunday. Thousands headed for designated areas in Rome where giant TV screens had been erected to show the ceremony.

Many Polish worshipers, who came here in large numbers to honor their countryman, headed for Piazza Navona in the center of Rome, where the church of Sant’Agnese in Agone was offering prayers in Polish.