US to probe claims of Syria chemical weapons use 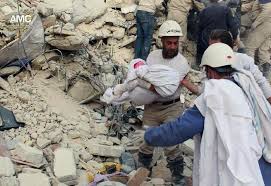 A child cries as he sits on a bed with others in Kfar Zita hospital following an alleged gas attack in the town . April 20, 2014. Bashar al-Assad’s regime has reverted to the use of a chemical gas first used at Ypres in the First World War in a series of recent attacks, Western officials believe.
Share:

Washington has indications that a “toxic industrial chemical” was used in a Syrian village dominated by the opposition and is investigating whether the Assad regime was responsible, the US state department said yesterday.

The move comes as President Bashar al-Assad’s government announced a date for presidential elections after three years of civil war.

Jennifer Psaki, state department spokeswoman, said the US was looking into evidence that chlorine was used in the village of Kfar Zeita this month.

“We are examining allegations that the government was responsible,” she said. “Obviously there needs to be an investigation of what’s happened here.”

US officials had earlier played down reports from Syrian opposition activists that helicopters had dropped chlorine gas on the village.

Ms Psaki said chlorine was not one of the priority chemicals Syria was obliged to declare to the Organisation for the Prohibition of Chemical Weapons as part of the international agreement brokered last year by the US and Russia to destroy Syria’s chemical weapons.

The allegations from the US follow comments from France’s President François Hollande, who said he suspected Syria was still using chemical weapons but that he had no proof.

The announcement of the Syrian election date comes after a rare public appearance by Mr Assad on Sunday, sparking attacks by rebel forces in the ­capital Damascus as a response.

Rebels have stepped up assaults on loyalist areas across the country in recent weeks in an apparent attempt to disrupt plans for the nationwide poll.

Western powers that back the opposition said this month that any attempt to run elections would be a “parody of democracy”.

However, Mohammed al-Laham, Syria’s speaker of parliament, said that elections would take place on June 3 and preparations would start “without delay”.

Opposition leaders poured scorn on plans to hold a nationwide vote in a country torn apart by civil war since 2011 and which has left more than 150,000
people dead. George Sabra, head of the Syrian National Council, a leading group of the umbrella opposition body known as the National Coalition, said the elections would prove a test for the international community.

Where will they hold these elections? In the besieged suburbs of Damascus where people can’t even get in food? In Homs, where the battles are raging? In the refugee camps of millions across the border?
– George Sabra, head of the Syrian National Council

“Where will they hold these elections? In the besieged suburbs of Damascus where people can’t even get in food? In Homs, where the battles are raging?
In the refugee camps of millions across the border?

“This is the height of bitter farce . . . ultimately though it is not just a test of the Syrians but the international community.”

UN-backed talks in Geneva collapsed in February with both sides far from agreement. A third round of discussions has been delayed. Mr Sabra said opposition leaders planned to send a letter of protest to the UN and speak to Russia and Iran, which have been the main backers of Mr Assad.

Some rebels vowed to attack any polling centre should elections go ahead.

“If they do those elections, we will threaten every polling area and you will see – no one will go,” said a fighter in the northern province of Aleppo.

The poll announcement was met with fresh violence yesterday. Mortar rounds crashed in the Old City and central Damascus, some hitting areas near the Syrian parliament. By afternoon, a car bomb blew up in the suburb of Mashrou Doummar, killing at least two security officers, according to the Syrian Observatory for Human rights.

“The rebels are sending a clear message to the regime that it can’t have real elections if every area is a conflict zone,” said Rami Abdelrahman, head of the Observatory.

Syrian forces have been fighting a months-long operation to regain control of Syria’s centre – from around the capital and
the Lebanon-Syria border region up to Mr Assad’s stronghold on the Mediterranean coast around the provinces of Latakia and Tartus. On Sunday, “barrel bombs” – highly destructive and improvised explosives dropped from helicopters – killed more than 60 people, the Observatory said.

In Damascus, government backers cheered the elections announcement even though Mr Assad has yet to announce his candidacy.