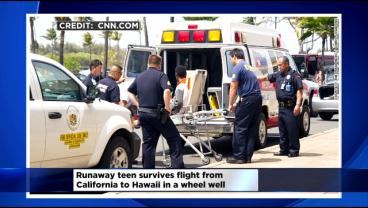 If a teen carrying nothing but a comb can do it, who else could breach airport security and hop on board the bottom of a plane?

That’s the question many are asking after a 16-year-old boy snuck into the wheel well of a Boeing 767 and flew from San Jose, California, to Maui, Hawaii.

Many immediately pointed the finger at the Transportation Security Administration.

While TSA does play a part in an airport’s overall security, their role is largely limited to the inside of the airport building — the checkpoint security.
Local and airport police handle the outside — the perimeter security.

“Perimeter security is a shared security,” John Sammon, a top TSA administrator, said during a congressional subcommittee hearing in 2011. The TSA depends on local police and airport personnel to play the lead role, he said.

Against this backdrop, Sunday’s incident has one California state lawmaker calling for better safety measures.

“I have long been concerned about security at our airport perimeters,” state Rep. Eric Swalwell tweeted. ” #Stowaway teen demonstrates vulnerabilities that need to be addressed.”

In the case of San Jose International Airport, security responsibilities lie not just with the TSA, but also with airport and city police.

Yet surveillance footage shows the boy hopping the fence at the airport. There’s also footage of him walking across the ramp toward the Hawaiian Airlines plane.

“No system is 100%,” Barnes said. “And it appears that this teenager scaled a section of our perimeter and was able to proceed onto our ramp under cover of darkness and into the wheel well of an aircraft.”

CNN aviation expert Michael Kay said it was a “physical feat” that the boy got past all sorts of people, apparently unnoticed.

“Clearly there’s a big security breach here, which in the post 9/11 world order is a concern.”

The boy landed in Maui on Sunday and told authorities he ran away from home in Santa Clara, California. He didn’t have any ID; all he had was a comb.

The boy told investigators he crawled into the wheel well of the plane and lost consciousness when the plane took off.

An hour after the plane landed at Kahului Airport, the boy regained consciousness and was captured on security footage crawling out of the left main gear area of the plane.w could stowaway get inside wheel well?

Maui airport district manager Marvin Moniz told CNN affiliate KHON that people have scaled the barbed wire fence and on to the tarmac before — but no one ever got on a plane.

“We went out, we did our rounds, did our checks, and it did not appear at any one point that there was entrance onto the airfield,” he said.

The airport has multiple levels of security, he said: more than 200 cameras, a private security firm, airport police and the TSA.

“What we can’t catch with cameras, we do vehicle patrol. We do foot patrols,” he told reporters.

Not the first time

Plenty of people have hitched a ride on a plane by holing up in the wheel well. Most don’t survive.

In February, crews at Dulles International Airport in suburban Washington found the body of a man inside the landing-gear wheel well of an Airbus A340 operated by South African Airways.

In 2010, a 16-year-old boy died after he fell out of the wheel well of a US Airways flight bound for Boston from Charlotte.

A report detailing his death found there were not enough security officers at the Charlotte Douglas International Airport in Charlotte, North Carolina, one of the fastest growing airports in the country.

The most recent known case of someone surviving was on a short domestic flight in Nigeria. A 15-year-old boy snuck into the wheel well of a flight from Benin City to Lagos — thinking it was a flight to the United States, according to an FAA report. The ride lasted only 35 minutes.

Apparently, some airports have a greater risk of stowaways than others. Many incidents involve people desperately trying to escape their countries.

After speaking with some Boeing 767 captains, Kay said, “There are airports around the world where airlines designate certain airfields as a stowaway risk.”

“What that means is that when the aircraft lands or when the gear cycles from an aircraft, the doors actually come back up. So you’ve just got the legs protruding,” Kay said.

“Now when they go to these airports such as Accra and Ghana in West Africa, what the engineers will do is they will actually drop those doors when the pilot does the walk around. So the pilot can get a really good view up into the undercarriage bays to actually physically check the stowaways.”

But those checks aren’t mandated worldwide.

“You can grab onto the struts and landing gear assembly kind of like a ladder, and you just jump on the tire and climb into the wheel well.”

But after takeoff, a whole slew of scenarios could kill a stowaway hiding in the landing gear wheel well.

Inside, there’s not much room — even less than in the trunk of a car, Guillen said. A stowaway would need to guess “where the tire is going to fold in when it closes after takeoff. There’s a high risk of getting crushed once the gear starts going in.”

The boy’s survival is “dumb luck, mostly,” said Dr. Kenneth Stahl, trauma surgeon at Miami’s Jackson Memorial Hospital. The temperature outside the airplane could have been as low as 75 or 80 degrees below zero, said Stahl, who is also a pilot. “Those are astronomically low temperatures to survive.”

The boy was likely so cold that “he was essentially in a state of suspended animation,” Stahl said. Being young likely worked in his favor, too. “No adult would have survived that,” Stahl added.

The boy could face permanent brain damage from the experience, in fact, it’s “more likely than not,” Stahl said. He could face neurological issues, memory problems or a lower IQ.

The teen also could have frostbite or a kidney injury because when the body freezes, particles of muscle enter the blood stream and damage the kidneys, Stahl said.

The FBI dropped out of the investigation once it was confident the teen didn’t pose a threat.

But the boy wasn’t the only lucky one on this journey; so were the passengers and officials.

“If someone can climb inside here, then someone can put something a little more sinister in there,” Kay said.

“And that’s the connection that security officials need to make.”