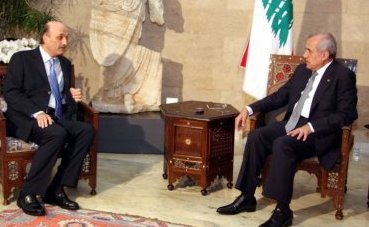 President Michel Suleiman phoned Lebanese Forces leader Samir Geagea to congratulate him on the launching of his campaign for the presidential elections and lauded his clear vision for a strong Republic , according to a statement by the Lebanese Forces press office on Thursday.

The LF statement said the phone conversation between Suleiman and Geagea took place on Wednesday night.

Geagea announced on Wednesday his presidential program that focused on restoring the authority of the state against the proliferation of weapons during a time of regional unrest.

The LF chief also called for a state monopoly on the use of force, including confronting Israel.

Yesterday Suleiman called on MPs to attend the April 23rd Parliament session to ensure quorum is achieved in order to elect a new Lebanese president.

“I do not want to stay three more years. As I have always been saying, I am an advocate of the rotation of power.” He said.

Speaker Nabih Berri called on the parliament to meet on April 23 to vote for a successor to Suleiman, whose term ends on May 25.

The meeting next Wednesday is expected to be the first in several attempts to elect a president before President Michel Suleiman’s six-year term expires.

The country’s leaders are deeply split along sectarian and ideological lines. Failure to agree on a consensus president could make things harder for the government at a crucial time while it struggles with sectarian violence and an influx of over a million Syrian refugees.