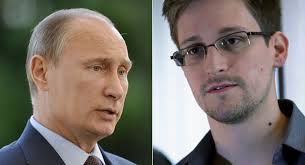 NSA leaker Edward Snowden asked Russian President Vladimir Putin about whether Russia uses its own mass surveillance system, in a video during a question-and-answer session on Russian television.

“Does Russia, intercept, store or analyze, in any way, the communications of millions of individuals?” Snowden asked, according to a video clip posted by Russia Today.

Putin, who identified Snowden as a “former agent” and “spy,” acknowledged that he too used to work in intelligence and said, “we are going to talk one professional language” and continued to say Russia does not have a mass data collection program.

“Our intelligence efforts are strictly regulated by our law, so how special forces can use this kind of special equipment to intercept phone calls or follow someone online, and you have to get court permission to stalk a particular person,” Putin said, according to an English translation by Russia Today.

“We don’t have a mass system of such interception and according with our law, it cannot exist,” Putin said.

However, Putin added that “criminals and terrorists” use technology and “of course” Russia’s special services have to use the same means in response.

He continued, “Our special services, thank God, are strictly controlled by the society and by the law and regulated by the law.”

Snowden’s question came during the session called, “Direct Line with Vladimir Putin,” an annual live broadcast with the president, according to RT. However, it was not immediately clear how Snowden was able to call in and whether the question was asked live or prerecorded. RT reported Snowden “appeared via a video link from an undisclosed location.”