FILE PHOTO : Samir Geagea, the Lebanese Forces leader called for sending home all pro-Assad Syrians, since all the Syrians that fled to Lebanon were supposed to be opposed to the Syrian regime
Share:

Lebanese Forces leader Samir Geagea announced launched on Wednesday his presidential election campaign during a press conference at his Maarab residence in which he stressed the importance for Lebanon of having a strong president.

Here are the highlights of his election platform in which he vowed to implement the constitution and promised many economic and social reforms if he was elected president.

-A strong president can apply the constitution and serve the higher interests of the Lebanese.

-The state cannot bear any [adjacent] entity to share its power and authority.

-The most important challenge I want to face is applying the constitution and laws.

-The current phase we are going through cannot be met with half decisions, half stances or a half president.

-The political realism that some people boast have turned into submission, surrender and bitter coexistence with a fait accompli.

-The integrity of national political life can only be achieved by clearly recognizing the principles that are not subject to discussion and that have formed the essence of the Declaration of Baabda and Bkirki national memorandum. 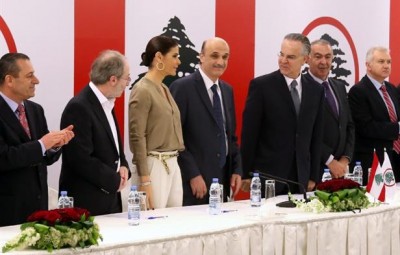 -I will not be lenient with fighting the corruption of some judges and I will work with the government and concerned departments to uncover them.

-It is important for Lebanon to be fully committed to the abolition of the death penalty in accordance with the United Nations charts and the international declarations on human rights.

-The prisons in Lebanon have turned into a hotbed of crime, terrorism and drug trafficking.

-We need to rush to develop plans and strategies to address this long-standing issue.

-We need to purify the work of some security and military forces and put them back on the correct national and balanced track so that they can provide security and protection to all Lebanon and all the Lebanese , without distinction or discrimination.

-The first step in any economic reformation is restoring security, stability and regularity of the work of the constitutional institutions.

-The first challenge before us is to activate the growth cycle and create jobs to benefit from the energies of the Lebanese youth, stop immigration and get rid of unemployment and poverty.

-We must first invest in infrastructure through the mechanisms of the partnership between the public and private sector.

-The newly discovered oil wealth is an advantage for the Lebanese economy.

-I am determined to protect this wealth by adopting the highest standards of transparency and good governance rules.

-We must create free trade zones in several locations of Lebanon, such as on the coast and in the Beqaa Valley.

-We shall never forget the need to reopen, operate and develop the airports in Qoleiat, Riyaq and Hamat, so that they can play a pivotal role in developing agriculture and the Lebanese economy as a whole.

-It is necessary to pass the administrative decentralization bill, which was prepared by a special committee formed by President Michel Suleiman.

-It is time for a real health revolution through the application of a mandatory health insurance system that covers all Lebanese citizens.

-The education sector needs to be rehabilitated due to its importance on more than one level.

-The real solution is to use an educational card given by the state for each student to enable them to attend any school or university they choose.

-The Lebanese Diaspora is an integral part of Lebanon. I am determined to suggest the idea of ​​creating an independent ministry for the diaspora.

-I will make sure to support the Arab Spring movement in spite of the many setbacks and pitfalls.

-I strongly condemn fundamentalism of all kinds and I will fight it relentlessly.

-Any solution to the Syrian crisis cannot but include the return of all the displaced to their homeland.

-We fully support the efforts of the Palestinian Authority in its relentless pursuit to reach a final solution [to the crisis with Israel] based on the Arab peace plan.

-We renew our support for the Palestinian refugees’ right of return and reject their naturalization in Lebanon under any pretext.

-We confirm our full support for the Special Tribunal for Lebanon in order to reveal the truth [behind the assassination of former Prime Minister Rafiq Hariri].

-I will work on applying the international law to demarcate the border with Syria and resolve the issue of the Shebaa Farms and Kfarshouba Heights.

-I will ask the legitimate Syrian government, whenever formed, to sign a joint report that admits that the Shebaa Farms belong to Lebanon and send it to the United Nations in order to force the Israeli withdrawal.

-The Lebanese state is solely responsible for the protection of Lebanon and the Lebanese people and for countering all kinds of Israeli attacks.