Iran: it is clear that Assad’s government will not collapse 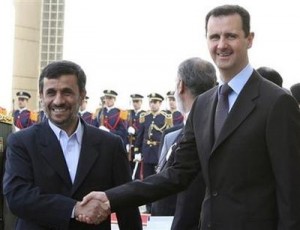 Iranian professor Professor Mohammad Marandi wrote a column in Iran’s state-run national media, calling on Western governments to set aside their illusions about the overthrow of President Assad.

“It is clear that – as the Iranians were saying from the start – the Syrian government will not collapse and that the only way forward is for this reality to be acknowledged,” wrote Marandi.

He warned that taking side with one party in the ongoing conflict in Syria will result in “more death and destruction.”

Marandi said the international community has to “support an election where the Syrian people choose their own leadership.”

He said it has become clear that foreign-backed militants have been behind the crisis in Syria while “their regional and Western backers” persistently laid the blame on the Syrian government.

Marandi said the US and its allies initially assumed that the crisis in Syria was “more birth pangs of a new Middle East” or “or perhaps a dagger through the heart of the Islamic Republic” but now after innumerable deaths and unmentionable destruction they have come around to the views of Iran from the beginning.