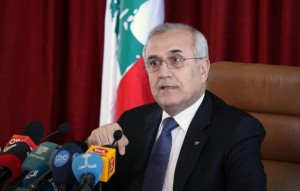 Hezbollah Secretary General Hassan Nasrallah said that President Michel Suleiman’s stances have “lost him the position of one who can run a national dialogue.”

Hezbollah had boycotted the March 31 session following a war of words with the president over the so-called army-people-resistance equation.

Nasrallah has noted that Lebanese parties can elect a president without being affected by foreign influence, pointing out that President Michel Suleiman’s recent remarks have ended his role as a national dialogue moderator.

In the second part of an interview with As Safir newspaper that will be published Tuesday, Nasrallah clarified the reasons that prompted his party to boycott the recent dialogue session, saying Suleiman’s “latest stances have made him lose his role as national dialogue moderator.”

“The general atmosphere in the country is an atmosphere of holding the presidential vote on time,” Nasrallah told As Safir, adding that the party will back the candidate who can maintain “the higher national interest.”

“The local factors will be influential more than ever regarding the presidential election and therefore an opportunity lies ahead of us to elect a made in Lebanon president,” Hezbollah’s leader added.

The constitutional timeframe to elect a successor to Suleiman began on March 25, amid the president’s refusal of any extension of his term — which ends May 25. Until the moment, only Lebanese Forces leader Samir Geagea has officially nominated himself for the presidency.

Turning to the issue of equipping the Lebanese Army, Hezbollah’s secretary-general reiterated his support for any foreign aid “except from Israel.”

“The resistance needs a consolidated and cohesive society and a strong, capable and just state,” added Nasrallah, noting that “the current circumstances are not befitting for searching for means to improve the political system in Lebanon.”