Armenians Search for Memorial to Preserve Memories of Horrific Genocide

by yalibnan
504
By Robert Fisk As the last survivors die out, academics must consider how best to create a lasting memorial to the 1.5 million who were murdered 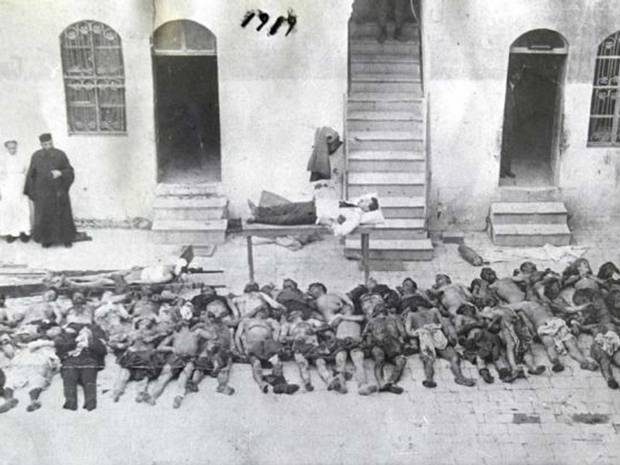 By Robert Fisk
As the last survivors die out, academics must consider how best to create a lasting memorial to the 1.5 million who were murdered. 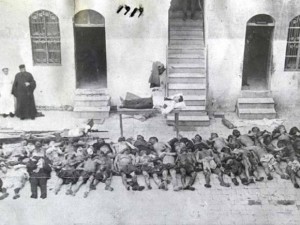 The very last Armenian survivors of the 1915 genocide – in which a million and a half Christians were slaughtered by the Ottoman Turks – are dying, and Armenians are now facing the same fearful dilemma that Jews around the world will confront in scarcely three decades’ time: how to keep the memory of their holocausts alive when the last living witnesses of Ottoman and Nazi evil are dead?

At a recent conference in California, Armenians have been discussing how to maintain the integrity of their historical tragedy in hundreds of years to come – when even the grandchildren of the survivors and victims have gone. Like Jews in Israel, Europe and America, the Armenians have amassed tens of thousands of documents, photographs, digital recordings of survivors’ testimony and files from Ottoman archives showing the orders for the destruction of Turkey’s Ottoman Christians. But will that be enough, in 500 years’ time, say, to separate the unique wickedness of the Armenian genocide – and, by extension, the Nazi destruction of the Jews – from all the other mass crimes against humanity in history?

Israelis use the same Hebrew word, shoah (holocaust), for the liquidation of 1.5 million Armenians in 1915, as they do for Hitler’s killing of six million Jews in Europe. The two events, despite the numerical difference in the total dead, have much in common. The Armenians were told they would be “resettled” in other lands of the Ottoman empire, before being deliberately sent on death marches of rape, pillage and mass slaughter across the deserts during the First World War. Their homes and property were confiscated, hundreds of thousands of Armenian men were separated and slaughtered with knives and axes in ravines by “special units” of the Ottoman government – the equivalent of Hitler’s Einsatzkommandos in the occupied Soviet Union – while their women and children were robbed, violated, starved to death and butchered by the roadside.

I have personally interviewed dozens of Armenian survivors – all now dead – who described the rape and murder in front of them of their sisters and mothers. One elderly Armenian lady told me of how Turkish gendarmes piled up babies and set them on fire; her mother tried to console her child by explaining that the cries were “the sound of the babies’ souls going up to heaven”. The Armenian conference in California watched graphic evidence of how the Turks “Islamised” Christian Armenian children in an orphanage north of Beirut; some of the small, starving inmates stayed alive only by grinding up and eating the bones of other children who had died.

The principal focus of the international conference at the Ararat-Eskijian Museum in California last month, in which I also participated, was to honour “those who helped rescue a generation of Armenians between 1915 and 1930” and included graphic footage of the largest home for child survivors after the genocide: a converted Tsarist barracks at Alexandrapole in which 22,000 children who had lost their parents were cared for by foreign NGOs, including the American Near East Relief fund.

Thousands of children emerged from their unspeakable ordeal blinded by trachoma after drinking contaminated water. “The sand would get into their eyes and doctors would have to open their eyelids and scrape the sand from their pupils,” researcher Missak Keleshian said.

There are direct links between the Armenian and Jewish holocausts.

Several junior German officers training Ottoman forces in Turkey witnessed the death marches and – in some cases – the results of mass killings. Some of these Germans later turned up as senior Wehrmacht officers in the Jewish killing fields of Belarussia and Ukraine after the Nazi occupation of the Soviet Union in 1941. Hitler himself asked “who now remembers the Armenians?” – before urging his generals to unleash their soldiers’ brutality against the Jews of Poland.

But how to extend the “life” of these memories beyond the still just-living world of the survivors?

Because of the quarter-century gap between the two holocausts, the Armenians have far less movie footage and far fewer photographs and documents than, for example, the Yad Vashem Holocaust memorial outside Jerusalem.

Armenian and Jewish scholars have long collaborated and advised each other on the collection of witness testimonies and documentation of their suffering. Although the Israeli government, to its shame, still does not recognise the Armenian suffering as a genocide, Israel’s top genocide researcher thinks otherwise, recognising that the Ottoman Turks were deliberately attempting to destroy an entire race of their people.

Armenians have for some years debated whether to open their own “book of the righteous”, to honour those brave Turks who tried to save Armenian lives – at mortal danger to themselves and their families – in just the same way as the Israelis acknowledge those gentiles who risked their lives to save Jewish victims of Hitler during the Second World War. There are two advantages to this: the first, and most important, would be a truthful declaration that not all Turks supported the genocide, and that there were men – soldiers, gendarmes and, in at least one case, a Turkish provincial governor – who redeemed their country’s honour by refusing to participate in this monstrous war crime of 1915.

Secondly, the Turkish government still today, shamefully, refuses to acknowledge the Armenian genocide – the Armenians were “victims of the chaos of war” is their fearful excuse. But an Armenian “role of honour” would place Turkey’s holocaust “deniers” in a difficult position: could they refuse to honour those of their own people who behaved with courage and integrity in the face of such barbarity, especially when the Armenians wish to acknowledge them?

Turkish academics are now themselves acknowledging the truth. Inside Turkey, many men and women are discovering that they have Armenian grandmothers – the very same women and young girls who were taken, or kidnapped, by Muslim men and shipped to their homes during the genocide.

But how to perpetuate for ever the uniqueness of these holocausts of the 20th century? I recall how, at a Muslim conference in Chicago, a Turkish man approached a stand where an Armenian was selling books on Middle East history, one of them a book of mine, which includes a substantial chapter on the Armenian genocide. He didn’t believe that the Armenians lost so many men and women, he told the bookseller and added: “Well, if it’s true, the Armenians must have done something wrong!”

This is the archetypal argument of the anti-Semite who denies the Jewish Holocaust. Blame the victim, not just as the cause of his own suffering, but as the perpetrator. Yet the vital element that was missing in this atrocious argument was not the identity of the victims, but the comprehension that the victims were human beings like you and me.

Surely that was why my own mother insisted that the first book I should read on my own – at the age of eight, I think – was the diary of Anne Frank, the German Jewish girl who was betrayed to the Nazis, along with her family, in her hiding-place in Amsterdam, and sent to Belsen where she died of typhus. Anne’s story was profoundly moving for millions around the world, not because she was Jewish but because she reminded every reader, Jewish or otherwise, of their own sisters and cousins and daughters. Indeed, Anne reminded them of themselves.

I am not suggesting that the Armenian and Jewish identities of the victims of two great holocausts of the last century – with their total dead of 7,500,000, perhaps more –should be diminished. The Jews were murdered because they were Jews and thus doomed under Hitler’s racist regime. The Armenian Christians were killed by the Turks because they were Armenians. Had they been Muslim Ottoman citizens – which a few were forced to become – they would have survived. But the common bond that we today share with the dead is our common humanity. The final horror of these genocides does not lie in the racial origins of the victims – that, in a sense, is to play Hitler’s game and that of the Young Turk pashas who massacred the Armenians.

The absolute and total historical memory of these appalling historical facts can, I suspect, only be perpetuated for hundreds of years by more closely associating the victims with ourselves. I have argued with Jewish readers over this. Some have insisted that by identifying the Jewish victims of the Holocaust as identical to Europe’s present-day non-Jewish peoples, the world would be denying the very Jewish identity of the six million dead. The Armenians, for various cultural, historical – and perhaps religious – reasons, have not taken this view. They are more inclined to accept that their victimhood should be shared.

After years interviewing Armenian survivors – and Jewish Holocaust survivors – I am not certain how the continuum of memory can be protected into coming centuries. The suffering of the Armenians and Jews is surely something beyond tears, a tragedy that should remain engraved in history forever – despite our disposition to lose interest in the crimes of ancient history. Who now mourns for the Huguenots or the dead of the Hundred Years War or the mass victims of Ghengis Khan? The Armenians and Jews of the 20th century, however, were the first victims of industrial genocide, a crime fuelled by nationalism.