Woman killed in her apartment by celebratory wedding gunfire in Sidon 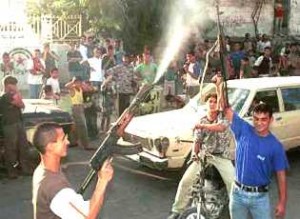 The Internal Security Forces on Sunday announced the arrest of nine people, after Sidon resident Wadiha al-Baidawi was killed Friday by celebratory gunfire while watching a wedding from the window of her apartment in Sidon.

The 19-year-old woman was killed after being hit by a bullet to the head, the ISF said in a statement. The arrested men are five Lebanese and a Palestinian, the ISF stated.

“Following investigations, members of the Sidon police station in coordination with the Intelligence Bureau arrested Saturday six people who had fired weapons during the wedding,” it added.

It added that the army’s intelligence branch in the South handed the Sidon police station three people – two Lebanese and a Palestinian — who were also involved in the shooting.

“A pistol and two pump-action rifles in addition to the gunshot that hit the woman and four bullet shells have been seized,” the ISF announced.

“Following investigations, it turned out that the Palestinian M. A. and the Lebanese H. W. were not involved in the shooting and they were released while the others were kept in custody and investigations are underway under the supervision of the relevant judicial authorities,” it added.