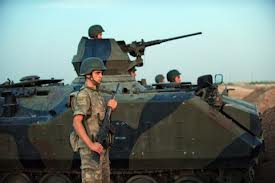 Regime tanks and warplanes pounded besieged Mleiha east of Damascus on Friday, pressing a campaign to take control of the opposition-held town, the Syrian Observatory for Human Rights said.

Syrian warplanes also raided a rebel-held district in the northern city of Aleppo, killing at least 11 people, and 22 were wounded when mortar rounds slammed into central Damascus, the monitor said.

In Mleiha at least eight fighters, including a rebel commander, were killed in fierce fighting with government forces, said the Britain-based Observatory.

The previous day 22 opposition fighters were killed, said the Observatory which relies on medics and activists on the ground for its reports.

On Friday, regime warplanes launched at least four air raids on Mleiha, which like much of the Eastern Ghouta area east of Damascus has been under army siege for nearly six months.

Mleiha is near regime-held Jaramana, which is frequently shelled by the rebels, and on Thursday six children were killed in one mortar attack, according to state news agency SANA.

Activist Abu Saqr, speaking to Agence France Presse via Skype from the Ghouta region, said that Syrian regime troops have been trying to storm Mleiha for the past two days.

But the rebel Free Syrian Army is blocking the offensive, he said.

The fighting has forced several families to flee to neighboring areas, he said, adding that “Iraqi militiamen” are backing the loyalist army. His comments could not be independently verified.

The army launched a campaign in March last year to crush rebel bastions in Eastern Ghouta and blockaded the area completely in October, leading to residents suffering from food shortages.

In Damascus mortar rounds rained down on two districts on Friday, wounding 22 people, said SANA which blamed “terrorists” — the regime term for rebels.

Meanwhile the death toll from air raids on the Aleppo rebel-held district of Shaar rose to 11, the Observatory said, after reporting only two killed.

Hundreds of people, mostly civilians, have been killed in air strikes on rebel areas in Aleppo since the regime launched a major aerial offensive on the northern city in December.

Clashes on Friday also rocked the coastal province of Latakia in western Syria as rebels pressed a two-week-old offensive in the heartland of President Bashar Assad’s clan and his Alawite sect.

Fighting was particularly fierce over a strategic hilltop known as Observatory 45 which commands towns and villages inhabited by Alawites.

Rebels overran it last week, but the Syrian Revolution General Commission network of activists said regime forces managed to take the summit of the hill on Thursday and fighting was raging again.

More than 300 fighters on both sides have been killed in Latakia in the past two weeks, the Observatory says.

Among them was Moroccan jihadist Ibrahim Benchekroun, a former Guantanamo inmate who fought U.S. troops in Afghanistan after al-Qaida’s September 11, 2001 attacks on the United States.

In northwest Syria, rebels took control of Babuleen and Salhiyeh in Idlib province, a year after regime forces had captured them, said the Observatory, adding that at least 18 troops were killed in the fighting.

The rebel advance helps tighten their siege on Wadi Deif army base, one of the regime’s last significant positions in Idlib.