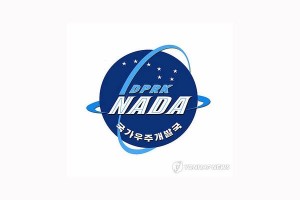 North Korea’s National Aerospace Development Administration, or NADA, has a new logo, one that looks a lot like that of NASA, right down to the blue circle, starry background, and stylized orbital path.

“Nada” means “nothing” in Spanish, which could be said to accurately sum up the Hermit Kingdom’s achievements beyond Earth’s atmosphere.

Of North Korea’s five attempts to reach orbit, all but one failed. The fifth attempt, an “observational satellite” launched in December 2012, reached orbit but is “tumbling out of control,” according to US officials.

According to North Korea’s state-run news agency, the insignia, which was unveiled to mark NADA’s one-year anniversary, represents the agency’s “character, mission, position and development prospects.”

About eight months before that launch, foreign journalists were allowed inside the country’s satellite command space center for the first time. The BBC’s Damian Grammaticas describes the “small, unremarkable, two-storey building.”

“Right in front of the building is a large cage, tall enough for a man to stand in, and several metres long. It’s full of live pheasants and a deer.

“It’s not clear if these animals are being kept as pets, or perhaps destined to be lunch for North Korea’s rocket scientists.”