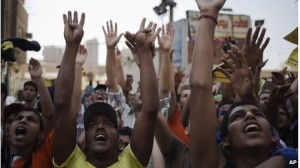 Egypt has barred entry to a Lebanese activist who wanted to deliver a petition against a court’s death sentences for 529 alleged rioters, an official with the activist’s group said Friday.

Wissam Tarif, a member of the U.S.-based Avaaz human rights organization, was detained at Cairo airport for several hours and put on a flight back to Lebanon, said the group’s spokesman Sam Barratt.

A court in southern Egypt sentenced 529 people to death last month for deadly rioting, after a perfunctory trial.

The sentences are likely to be overturned on appeal because the court did not even bother confirming the presence of the defendants at the start of the trial, legal experts say.

Tarif had planned to present the petition that of more than one million signatures gathered online to the mufti, the government’s official interpreter of Islamic law.

Egypt courts consult the mufti on death sentences as a formality, before holding a final hearing to confirm the judgment.

Hundreds of alleged Islamists have also been sentenced to prison terms for violence in the wake of the army’s ousting of Islamist president Mohammed Morsi in July.