Geagea backed by his party to run for president 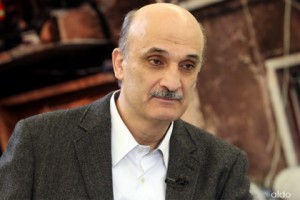 The Lebanese Forces executive committee unanimously agreed on Friday to back the candidacy of LF chief Samir Geagea to the presidency.

MP George Adwan, Geagea’s deputy, said following the meeting of the executive committee that was also attended by LF MPs that there was an agreement to back the politician in his bid to become president “out of the patriotic and political principles of the LF and the March 14 alliance.”

Such a decision was taken in an effort to implement those principles through the state to have a free and independent country that preserves democracy and human rights, the statement said.

Adwan said that Lebanon is at a sensitive stage at the security and economic levels amid the spread of chaos and the proliferation of illegitimate weapons, which lead to the disintegration of the state.

“The LF is keen on respecting democracy in political confrontation,” the MP said as he read the statement.

“A dramatic change is necessary to come out of the tunnel and cause a positive shock to give back the presidency its post as a guarantee to everyone … and in confrontation of the dangers against the unity of the nation,” he said.

“It’s time for the Lebanese to elect a president made in Lebanon,” he told reporters after reading the statement.

“There is contact with the March 14 camp and there are continuous meetings,” Adwan said amid reports that Geagea took a unilateral decision to announce his candidacy.

“The coming days will reveal the path of the candidacy,” the lawmaker, as he shied away from directly answering a question on whether the announcement was made in coordination with March 14.

The LF chief “has informed all allies about his candidacy,” he said, adding: “It’s natural for Geagea to be a March 14 candidate.”

Before the meeting, Geagea told the conferees that the state’s authority has been violated along the border and the internal scene due to the spread of illegitimate arms.

“Confidence in Lebanon was shaken as several Arab countries banned their citizens from traveling to Lebanon. So did Western states,” he said.

“Given this reality, we must either continue along with it and bring about more deterioration or take radical steps that will bring about a new reality in the country,” he stated.

“We are gathered here today to introduce a new reality in Lebanon that guarantees its security, stability, and sound economy,” Geagea added.

“I have briefed my allies about the issue of my nomination,” the LF chief later told reporters.

He also admitted that the March 14 coalition “hasn’t yet taken a unified stance.”

Deputy Speaker Farid Makari was the first politician to back Geagea’s nomination.

“The Lebanese people have a duty to elect a new president who serves the country,” the lawmaker said during a press conference in parliament.

President Michel Suleiman’s six-year term ends on May 25 but the Constitutional deadline for the election of a new head of state started on March 25.

Geagea is a staunch critic of Hizbullah and the Iranian and Syrian regimes.

His rival, Free Patriotic Movement leader MP Michel Aoun, who is Hizbullah’s ally, said on Wednesday that he would not run for president if Geagea gained the support of al-Mustaqbal movement.