Syrian opposition calls some Lebanese racist over handling of refugees 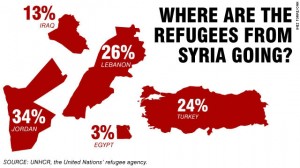 The Syrian National Coalition demanded on Thursday putting an end to the “racist practices” against Syria’s refugees in Lebanon.

“We call for putting an end to the racist practices, discrimination, oppression and even physical attacks of some Lebanese religious communities against Syrian refugees,” SNC said in a released statement.

The statement called on the international community “to provide the largest possible support to Lebanese authorities, to enable them to deal with the huge numbers of refugees that were forced to flee their houses, escaping the criminality of (Syrian President Bashar) Assad.”

The SNC lauded a solidarity campaign against racism launched by Lebanese activists on social media websites to “highlight the difficult conditions Syrian refugees are going through in Lebanon.”

The statement was referring to a popular campaign launched as a response to a press conference by former telecommunications minister Nicolas Sehnaoui and Free Patriotic Movement official Ziad Abs, during which the two men called for protecting citizens in the Beirut neighborhood of Ashrafieh, after the increase in the number of refugees.

The two FPM officials also called for closing the border with Syria “because Lebanon can not bear receiving more refugees.”

SNC’s statement also pointed out to the growing “phenomenon of refugee suicide, through which Syrians aim at escaping their difficult conditions.”

“This is a very dangerous phenomenon that should not be overlooked,” the coalition stressed. “Their life conditions were worse than death, and that’s what drove them to commit suicide.”

The UNHCR announced on Thursday that the number of Syrian refugees who have fled their war-torn country and came to Lebanon has reached 1 million.

According to the UNHCR, refugees from Syria, half of them children, now equal a quarter of Lebanon’s resident population, warning that most of them live in poverty and depend on aid for survival.