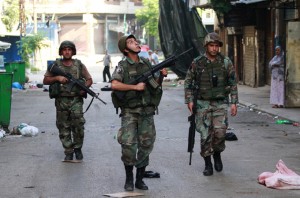 The Free Sunnis of Baalbek Brigade noted Thursday that “Hizbullah and Iran” are behind the security plan that the army is poised to implement in the Bekaa city, vowing to turn Baalbek into “a graveyard for the ‘Crusader army’ and Hizbullah.”

“Neither you nor Hizbullah are capable of removing the revolutionary pulse from our hearts, even if you try to implement the Iranian scheme under the pretext of ‘the security plan in Baalbek’,” the shadowy group said in a post on its Twitter account, addressing what it called “the non-Lebanese army.”

“We swear to God … that we will turn Baalbek’s land into a graveyard for the ‘Crusader army’ and Hizbullah,” the Brigade pledged.

The group warned the army against “recklessness and defiance,” saying it has discovered that the security plan has “malicious goals.”

“It is a security crackdown against the Sunni Ummah (nation) because it is targeted against the areas of Sunni influence in Lebanon,” it added, alleging that the plan — which was devised by the Higher Defense Council and approved by cabinet — is aimed at “reining in the Sunni community in Lebanon.”

The mysterious group had claimed that it is an affiliate of the Islamic State of Iraq and the Levant extremist group, but the ISIL has denied that.

On March 16, the Brigade engaged in a war of words with the al-Nusra Front in Lebanon, which is believed to be a local franchise of the Syria-based, Qaida-linked al-Nusra Front.

The dispute erupted after both groups claimed responsibility on Twitter for the deadly suicide bombing that rocked the Bekaa town of al-Nabi Othman.

On Saturday, the Free Sunnis of Baalbek Brigade claimed responsibility for a suicide attack that killed three army troops in the outskirts of the Bekaa border town of Arsal.

The security plan was launched in the northern city of Tripoli on Tuesday and it is expected to move to tense areas in the Bekaa and Beirut in the coming days.