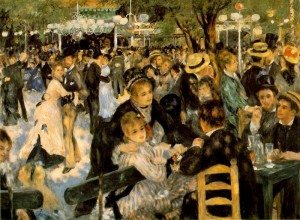 The last of 10 artistic masterpieces from France arrived under heavy security in China on Thursday, for a show featuring a billion dollars’ worth of art.

The paintings are so valuable that they were transported on two different aircraft, said Anthony Chaumuzeau, cultural counselor at the French embassy in Beijing.

The exhibition at Beijing’s National Museum will include Auguste Renoir’s masterpiece “Dance at Le Moulin de la Galette”, normally kept at the Musee d’Orsay in Paris.

Among the other renowned canvases in the ten-picture show are Pablo Picasso’s “Matador” and Hyacinthe Rigaud’s full-length portrait of king Louis XIV, from the Palace of Versailles.

The exhibition is the first to gather from multiple French museums “10 masterpieces that can be considered absolute masterpieces and all art lovers across the world recognize instantly”, said Jean-Paul Cluzel, president of France’s national museums association, which is running the project.

The works will go on display at the museum on Tiananmen Square for nine weeks starting from next week.

The oldest is Jean Clouet’s portrait of king Francois I, from around 1530, lent by the Louvre, which also sent Georges de La Tour’s 1642 work “Saint Joseph the Carpenter” and Jean-Honore Fragonard’s “The Bolt”, completed around 1777.

All three of them arrived Thursday, along with another Renoir.

A second Picasso completes the line-up for the exhibition, one of the events marking 50 years of diplomatic ties between Paris and Beijing.

“We tried to pick top-class works as they are all ultra-well-known, but at the same time they represent different aspects of French life,” Cluzel said.

Francois I evokes “royal grandeur”, he said, while St Joseph references Roman Catholicism. Fragonard’s picture illustrates the “gallantry of the 18th century”, the Louis XIV portrait “the power of France” and Dance at Le Moulin de la Galette “the golden age of the Third Republic”, he said.

But there will be one notable absentee from the exhibition — Eugene Delacroix’s “Liberty Leading the People”, inspired by France’s second revolution in 1830 and evoking a key theme for the Chinese Communist Party: a popular uprising uniting workers and peasants.

It is included in school textbooks in the People’s Republic, but when it was sent to Japan in 1999 it returned damaged, and was vandalized in France in February last year.

The French government also baulked at the cost, Cluzel said, as the monumental canvas would need a particularly large cargo plane to transport it.