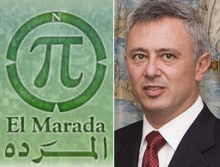 “Speaker Nabih Berri intends to call for a session on April 15 to elect a president, and [Aoun] is the candidate [of choice] for the Marada Movement,” Arayji told Voice of Lebanon (93.3) radio station on Thursday.

“In the event that Aoun does not run [for presidency], we will negotiate with him to make the right decision.”

Arayji also stressed the need for the presidential elections to take place within the constitutional deadline.