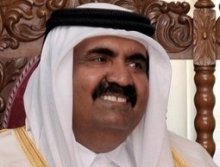 A top Dubai security official, General Dahi Khalfan, has claimed Qatar as forming part of the United Arab Emirates, adding a new dimension to a dispute with Doha.

“Qatar is an integral part of the UAE,” the outspoken Khalfan, a longtime critic of the Doha-backed Muslim Brotherhood, wrote on Twitter, demanding his country “reclaim” Qatar.

“We must put up signs on our borders with Qatar stating: ‘You are now entering the UAE’s eighth emirate,'” said Khalfan.

The UAE is a seven-member federation.

Leading up to the region’s independence from Britain, Qatar and Bahrain in 1968 joined the Trucial States, as the UAE was then known, but their union fell apart three years later.

The Emirates, Saudi Arabia and Bahrain last month withdrew their envoys to Doha, accusing it of meddling in their internal affairs by supporting Islamists.

Qatar is a staunch supporter of the Muslim Brotherhood, viewed by most conservative monarchies in the Gulf as a threat to their grip on power.

Khalfan, who was Dubai’s police chief before being promoted to second in command of security, has more than 600,000 followers on Twitter.

His comments on Qatar sparked a wave of controversy on the social network.