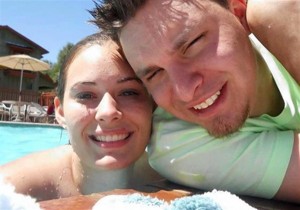 A U.S. 22-year-old newlywed who pushed her husband off a cliff barely a week after the couple married was jailed for 30 years, officials said.

Jordan Linn Graham faced up to life in prison for second-degree murder after she admitted to pushing Cody Johnson, 25, off the side of a popular hiking trail July 7 in Glacier National Park.

He fell 200 feet to his death. Johnson’s body was found July 11 after Graham – who claimed she didn’t know where he’d gone – said the area was on her husband’s bucket list.

U.S. District Judge Donald Molloy insisted Graham – who repeatedly lied and changed her story about what had happened – never apologized for the murder and showed zero remorse, the Missoulian reported. Graham initially told police that Johnson, 25, had gone missing after telling her he was going for a drive with a friend. But she subsequently admitted she had lied.

“After providing several false statements … Graham ultimately admitted pushing Cody from behind with both hands,” said the U.S. Attorney’s Office in Montana, which prosecuted the case.

Judge Donald Molloy jailed her for 365 months to be followed by five years of supervised release, it said in a statement.

Graham and Johnson married on June 29. He went missing eight days later, and his body was found on July 12 below The Loop, a well-known lookout area in the Montana park.

Friends of Graham told detectives that she had voiced second thoughts about having gotten married right after the wedding, wondering “what the heck I just did this all for,” prosecutors said.

After her husband’s disappearance she had numerous exchanges, often by text message, with people about what had supposedly happened to him, saying he had gone off with friends.

Three days after he vanished, she created an email account and used it to write to her normal email address, pretending to be a friend explaining how Johnson had gone off with other friends, and then disappeared and was probably dead.

“He was saying he needed to be with buddies for a bit and take them for a joy ride before they had to go. So he said bye to me and they took off in a black car for a ride,” she wrote to herself, pretending to be “Tony.”

“Three of the other guys came back saying they had gone for a ride in the woods somewhere and Cody got out of the car and went for a little hike and they are positive he fell and he is dead Jordan,” the message continued.

“I don’t know who the guys were but they took off. So call off the missing person report. Cody is for sure gone. -Tony.”

Graham eventually told detectives where to find his body the following day, at the bottom of a 300 foot (91 meter) cliff. A special-lift helicopter had to be used to recover the corpse, prosecutors said.