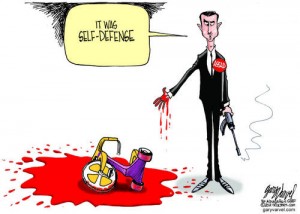 Syrian President Bashar Assad said Wednesday that key ally Moscow had helped re-establish “a multipolar world”, as he met with a high-level Russian delegation in Damascus.

“The important role that Russia is playing on the international scene is today making a clear contribution towards drawing up a new map for a multipolar world,” Assad was quoted by state news agency SANA as saying.

Russia, Assad added, is helping “achieve international justice, in the interests of states and people who believe in their sovereignty and independent decision-making.”

The delegation was delivering a message from Russian President Vladimir Putin, who has provided political, military and financial backing to Assad’s regime since the outbreak of a revolt in March 2011.

Assad has previously expressed his support for Russia’s actions in Crimea, which have drawn Western sanctions and a backlash from NATO.

He “expressed appreciation for Russia’s positions and for its support for Syria, and satisfaction with the level of cooperation… under way between the two friendly countries.”

Syria has since the start of the revolt claimed that regional and Western powers, chiefly Turkey, Saudi Arabia and the United States, are to blame for a “terrorist” plot targeting the country.

SANA said Assad made his comments Wednesday morning, during a meeting with the Imperial Orthodox Palestine Society.

The Russian organization is headed by former prime minister Sergei Stepashin, who was in Damascus to deliver a message from Putin.

According to SANA, the message “reaffirmed his country’s determination to continue to support the Syrian people’s resilience in all areas, in the face of the war it is waging against the international terrorism supported by some Western and regional countries.”

Syria’s war has killed more than 150,000 people and forced nearly half the population to flee their homes.