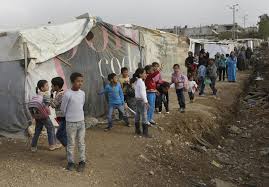 “Lebanon’s confessional demographic is fundamentally fragile and [easily] shaken by any sudden event,” Gemayel said at a press conference in Germany.

“How will the [country’s] condition [be affected] by this [large] influx of refugees, the great majority of whom are from one group?”

He went on to highlight the dangers refugees pose to the security situation in Lebanon and the country’s economy.

“The effect of the [refugee crisis] on Lebanon is dangerous. On the security front, this dense, undisciplined and unstable presence exceeds the army and security forces’ capacity to [bring it under control.]”

“It is difficult for the [already] fundamentally weak treasury, which suffers from an exorbitant public debt, to bear this frightful amount of additional burdens.”

Lebanese President Michel Suleiman warned during the Arab Summit in Kuwait on Tuesday that Syrian refugees now constitute 32% percent of Lebanon’s population, and exhorted Arab and international powers to help Lebanon bear the economic and social burden of the growing refugee population.