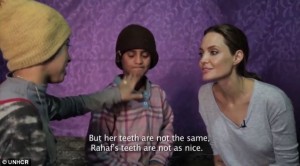 Lebanon could collapse under the weight of the massive influx of Syrian refugees, United Nations High Commissioner for Refugees Antonio Guterres warns.

Without economic and financial support, and an increased effort to share the burden of Syrian refugees, “Lebanon [does] not [have] the possibility to go on with the present situation,” Guterres said.

Angelina Jolie, a special envoy for the UNHCR, is highlighting the plight of Syrian refugees.

She recently visited with a family living in a Lebanese refugee camp, speaking with a young child, Hala, and her five siblings.

Hala saw her mother killed under their collapsed home, and their father is missing and presumed dead.

Hala, one of a huge number of Syrians who arrive in East Lebanon every day and now make up one quarter of the country’s population, had been living with her siblings in a refugee camp in the Beqaa Valley for a year when the film was shot during Jolie’s visit in February 2014.

One year before the film was made, Hala’s mother was killed in front of her and her 17-year-old brother Kamel by a regime air strike.

Following their mother’s death, Kamel began to suffer seizures and has reverted to mental level of a child. Hala’s father is missing presumed dead, leaving her responsible for the entire family.

“Twenty-five percent of the Lebanese population today is Syrian,” Guterres said. “We have more Syrian students in Lebanese public schools than Lebanese students.”

“Lebanon has serious problems with electricity and water, and largely because of this huge increase in population; the health system is totally overburdened, and the security implications of the Syrian crisis to Lebanon are absolutely dramatic.”

“Nobody can afford the collapse of Lebanon in the present moment.”

Lebanon has felt the brunt of the Syrian conflict, with just under a million refugees, according to the U.N.

Turkey and Jordan are both caring for about half a million refugees each; Iraq and Egypt are also carrying a significant burden.

“I remember in Jordan another child, a 4-year-old child, a boy,” Guterres recalled. “We were there for 20 minutes in his family’s tent. And he was constantly shooting with a toy gun.”

“Nobody managed to calm him down because violence is so deeply now in his way of life.”

The UNHCR is trying to help those children with “psychosocial support” but that is often ineffective given the extent of some of the trauma, Guterres admitted.

“When we see this tragedy, when we see this generation, it really breaks our hearts, because it’s not only these children; it’s the future of Syria that is being completely undermined.”

Guterres’ mandate as U.N. High Commissioner for Refugees is humanitarian, but as a former Portuguese prime minister, he says the security implications of the conflict are hard to miss.

“I’m sure now the biggest threat, not only to regional stability but to global peace and security that we have faced since many, many decades ago.”

“Recently in a meeting with the minister of home affairs of Europe, their main concern was not the number of refugees coming into Europe; it was the number of European citizens going into Syria to fight in Syria now.”

“And that one day will come – radicalized, hardened, and potentially a security threat for their own countries.”

It is absolutely essential, Guterres said, that the international community overcome its divisions and work to end the conflict.

“I have never seen any major crisis in the world being solved without a lot of discreet, behind-the-scenes diplomacy.”

“What is for me dramatic in Syria is that I don’t see that activity behind the scenes.”

It is vital that all countries with a stake – whether politically or militarily or financially, and whether with the government or opposition – play a role.

He cited the U.S., Russia, Iran, Saudia Arabia, Qatar, and Turkey to name just a few.

“I believe it’s absolutely essential that these countries all understand that today this is a war nobody is winning,” he said. “It is clear that both the government and the opposition cannot survive without the support of the key stakeholders around the conflict.”

“This is becoming a serious threat to everybody.”