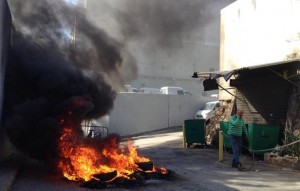 The workers’ representative, Lebanon Makhoul, threatened to shut off electricity supply in all Lebanese areas if the draft law proposed by Change and Reform bloc MP Ibrahim Kanaan was endorsed by the parliament.

“Kanaan’s draft law is a massacre against the daily-waged workers because it does not do justice for them or provide fair indemnities to those who will not be permanently employed,” Makhoul warned.

In turn, Kanaan asked the protesting workers to send their proposed amendments to the draft law to the parliament.

“If they have amendments to the draft law, they can send them,” Kanaan told LBC television.

“The draft law was approved by all political blocs. It is not my draft law, I [just] signed it because it is a solution for their cause,” he added.

Kanaan’s draft law stipulates that contract workers seeking to become full-time employees should undergo examinations that would decide who will and who will not be accepted.