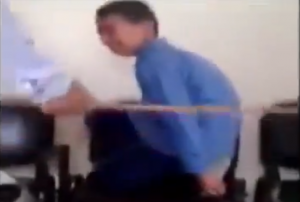 Minister of Education Elias Abou Saab said that the video posted on Tuesday of a student being caned by a teacher has uncovered similar cases. The video showed the principal, Moussa Daher, brutally foot whipping one terrified student after another, while they cried and begged him to stop. The video is embedded below.

“The video that spread of a teacher beating a student in one of the schools in Al-Zahrani has exposed similar cases in other areas,” Abou Saab told LBC in an interview on Wednesday.

He said during a press conference: “We will take the harshest punishments against anyone beating a student.”

“What happened was inhuman and a red line, and strict measures will be taken,” the minister said, stressing that child abuse is unacceptable.

The leaked video was posted Tuesday on social networking websites, but it does not mention the date on which it was filmed.

The school, which belongs to the al-Maqassed Philanthropic Islamic Association, is located in the Sarafand town in southern Lebanon.

The school decided to close on Wednesday, in condemnation of the attack on students.

In October 2013, a teacher in the northern city of Tripoli asked students to beat up a classmate in a brutal way with the aim of “disciplining” him.