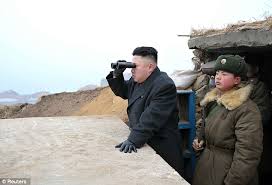 North Korea has fired two medium-range missiles into the sea off its east coast, a move Seoul and Washington immediately slammed as a provocation.

South Korea says the suspected Rodong ballistic missiles fired early Wednesday flew about 650 kilometers before landing in the sea between Korea and Japan.

That represents an escalation for Pyongyang, which has test-fired a series of short-range Scud missiles in recent weeks.

Seoul’s Defense Ministry spokesman Kim Min-seok called the move a “serious provocation” and noted it was meant to a send a political message.

“North Korea’s missile launch this time is a clear violation against United Nations Security Council resolutions. Also, it is a serious provocation against South Korea and the international society. This is in opposition to declarations in favor of North Korea’s denuclearization during the Korea-China summit meeting and the Korea-U.S.-Japan summit meeting at the Nuclear Security Summit (in the Netherlands), and in (opposition to) the annual Korea-U.S. joint military drill. It is also showing its capability of firing ballistic missiles.”

It said the North provided no warning beforehand, adding to fears about the safety of commercial airliners and ships passing through the area.

Earlier this month, a North Korean rocket, fired without warning, crossed the trajectory of a Chinese airliner with 200 people on board.

“We have lodged complaints against North Korea, as this was an extremely problematic action considering the safety of the navigation of flights and ships. It also violates the U.N. Security Council resolution and the Japan-North Korea Pyongyang Declaration.”

The launch came as leaders of the United States, Japan and South Korea met in the Netherlands, with North Korea’s nuclear ambitions high on the agenda of their talks.

“North Korea is very good at timing – rubbing it in, adding insult to injury. And this is a way for North Korea to remind the United States and Japan and South Korea that it is a political factor to be reckoned with – that it cannot be ignored.”

Analysts say the launches are an expression of Pyongyang’s anger at ongoing annual South Korean-U.S. military drills, which run until next month. The North routinely criticizes the drills, saying they are rehearsals for an invasion.

North Korea has defended its short-range missile launches as routine tests. It has not commented on the latest medium-range launches.