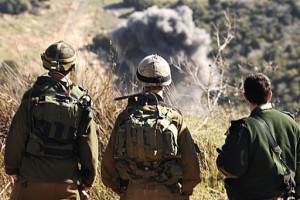 Only a full-scale Israeli ground offensive will defeat Hizbullah in the event of another war similar to the 2006 conflict between them, a high-ranking Israeli army official has said.

“It’s clear to the general staff that a ground maneuver is what’s needed” to confront the threat of rocket attacks, the official, who was not named, told the Jerusalem Post daily in remarks published on Wednesday.

“The enemy is growing powerful” in its ability to rain down rockets and missiles on the Israeli home front, the source said, but it remains challenged by the army’s ability to launch a ground offensive.

The Israeli Ground Forces Command embarked on a series of upgrades designed to better prepare the military for a possible ground invasion, the newspaper said.

One change under way involves an upgrade to weapons systems, the daily reported.

“We don’t have to get the air force to drop 250kg. bombs on every target. Sometimes a shell going through a structure is enough,” it quoted the official as saying.

Ground Forces planners are taking into account an enemy that knows how to strike and “disappear,” the official said in reference to Hizbullah.

The party “has many missiles and explosive devices” to target advancing Israeli armored vehicles,” he warned. As a result, Ground Forces planners are aiming to inject units into the depth of Hizbullah’s territory in southern Lebanon.

“For us, that means we must restructure and prepare, and to stay ready for a clash that can occur tomorrow, in a few months, or a few years,” he told the Jerusalem Post.

“A ground offensive has to be deadly, defensible, network-based and agile, with advanced firepower adapted to… a changing battlefield,” the source said. “It’s clear to us that we have to shorten a conflict. A ground maneuver will accomplish that.”

“We have to get to the enemy and strike its ability to fire on us. In the end, this creates pressure on it and on Lebanon, and this is an enemy that understands when it’s starting to lose,” he added.