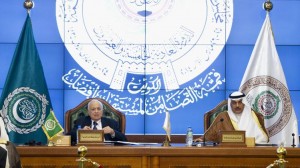 Arab leaders called Wednesday for a political solution to the conflict in Syria, overlooking Saudi-backed demands for greater military support for rebel forces to tip the balance in the war.

Syria’s opposition National Coalition chief Ahmed Jarba called at the opening of the summit for the rebels to be supplied with “sophisticated” weaponry.

Saudi Crown Prince Salman bin Abdulaziz, whose country is a key backer of the revolt against Syrian President Bashar Assad, said the world was “betraying” rebels by failing to arm them and leaving them “easy prey”.

But the final declaration read out at the end of the summit called instead for a political solution to the three-year conflict which has cost over 146,000 lives.

“We call for a political solution to the crisis in Syria based on the Geneva I communique,” they said.

The communique drawn up at an international conference in 2012 in the Swiss city calls for a “peaceful transition” in Syria without specifying the fate of Assad.

“We have no alternative to a political solution,” Kuwait’s Foreign Minister Sheikh Sabah Khaled Al-Sabah told a press conference at the end of the summit.

The summit condemned the Syrian regime.

“We strongly condemn the massacres committed by the Syrian regime against unarmed people,” leaders of the 22-member Arab League said.

They reaffirmed their “total support for the Syrian National Coalition as a legitimate representative of the Syrian people.”

The seat itself would remain vacant until the opposition meets “legal and technical” requirements.

A clearly dissatisfied Jarba told the opening session on Tuesday that the decision “sends a message to the Assad regime encouraging it to continue to kill Syrians”.

The Syria government’s brutal repression of protests which erupted in March 2011 had resulted in its suspension from the Cairo-based Arab League.

The “Kuwait Declaration” made no mention of arming the rebels, although the Doha summit had stressed the “right of every state to offer all forms of self-defense, including military,” to the opposition.

Arabi said the issue of supplying arms to the opposition was “not discussed” in Kuwait.

The declaration echoed U.N. peace envoy Lakhdar Brahimi, who called at the summit for a political solution and urged an “end to the supply of arms to all parties”.